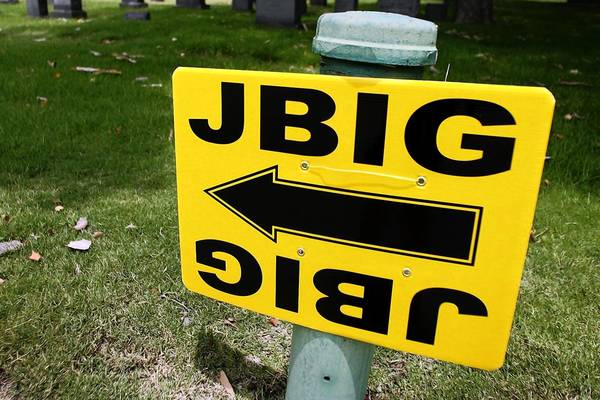 What do a small yellow sign with black lettering and an arrow and the phrase “beef not got bone, dog not got business” have in common? If you answered nothing, you would be wrong. Let me explain. On first glance, it’s true that the sign and phrase are nothing alike. But what if I told you they there were both codes for people in the know. Then what they have in common is that they both need to be decoded.

Signs like the one pictured above may be familiar to you, especially if you live or work in Rockdale or Newton counties. They’re all over the place and have come to suggest that: where there's a little yellow sign, there's a film or TV production underway. Perhaps you’ve seen them near freeway exits, at the corner of intersections or on the side of streets. These signs are put up by production companies filming all around the metro-Atlanta area.

But if you've paid attention to what's written on these signs, you'll know that they don't just say the name of the movie or TV show. Instead, they'll have some seemingly coded word or collection of letters, numbers and an arrow.  After seeing these signs, it finally occurred to me that each sign is made to be modular and can be flipped upside-down to point left or right.

Okay, so I admit that it takes me a bit longer to catch on. And speaking of catching on, let's go back to the phrase "beef no got bone, dog no got business." To the untrained ear, this sounds like nonsense, but to me, it's common: It's one of the many Guyanese sayings that my mother-in-law Joy Maxwell uses. After thirteen years of hearing her use the “coded” language, I recently decided to ask her how to decode the sayings. I told you that I was slow. Here are a few decoded sayings that she explained to me:

“Long jumbee suck teet.” (frequently said when frustrated with someone or something)
"Coming events cast shadows" (feeling that something is about to happen)
“Mouth open, story jump out” (a slip of the tongue)
"Beef no got bone; dog no got business" (It's none of your business)
Hag me ask eh Mumma whey mek eh mout so long; eh Mumma says noh worry baby when you grow up you wah fine out. Translation: Hog questioned his Mama why is his mouth so long, His mother replied, don't worry baby when you grow up you will find out. (As you grow, you will learn more about the world).

Like the little yellow directional signs, you almost have to have a secret decoder ring (for those who remember these from Ovaltine or from cereal boxes) to get the meaning of these phrases! These phrases are commonplace for people in the know, that is people of Caribbean descent. And if you’re working on a film, you're in the know about the upcoming production so you will receive a call sheet telling you time to arrive and a map. Sometimes there is always a simple address to plug into a GPS system, so the signs get the people in the know to where they need to go.

The problem is that I’m not Caribbean descent nor am I part of the movie industry. So, I depend on folks in the know to provide me the code. Asking about my mother-in-law phrases got me to thinking about being in the know and not knowing the system. In the UMC (another code for people in the know), there are a lot of alphabet soup codes tossed around that people in the know are comfortable using. Here are few that you might recognize: dCOM, GBHEM, BOM, and GCFA.* How many of them do you know?

Unfortunately, our local churches are notorious for using its codes such as UMW, UMM, and SPPRC often without thought that there might be people who aren't in the know and need a secret decoder ring. Using coded language is especially troublesome when considering that 50% of the people who live inside the boundaries of the Atlanta Decatur Oxford (ADOX) District are between the ages of 2 – 37 and may not know what any of our codes mean!

If I’ve learned anything from coded language, is that while it is comfortable for those in the know, there always seems to more people without secret decoder rings. And like those rings that we got from cereal and Cracker Jack boxes in the 1970's, they only work for a limited time, until you need to upgrade or widen the circle of those in the know. I wonder what would happen if we were more careful about using coded language and instead spell things out more frequently during our church announcements and listings in our bulletins? If nothing else, everyone would be in the know without a need to crack the code.

*District Committee on Ordained Ministry, Commission on Status and Role of Women, General Board of Higher Education and Ministry, Board of Ministry, General Council on Finance and Administration.