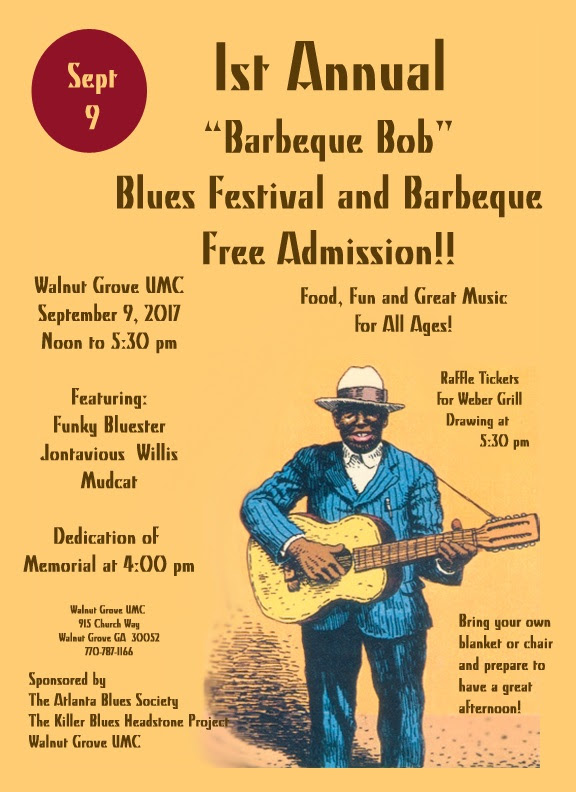 On September 9 Walnut Grove UMC will host “Barbeque Bob” Blues Festival, a free concert to honor famous Atlanta blues musician Robert Hicks, better known as Barbecue Bob (September 11, 1902 – October 21, 1931). The concert will feature performers Funky Bluester, Mudcat and Jontavious Willis. We hope this if the first of what will become an annual event.

Our church is partnering with the Atlanta Blues Society and the Killer Blues Headstone Project. The featured musicians are all well-known Atlanta personalities and will play the Piedmont Blues from noon to 5:30 pm. Barbeque and beverages will be available all day.

This event is a good fit for our church because, first, Barbecue Bob is buried in our graveyard. (This is the first time I’ve ever seen a church cemetery turned into an asset instead of a liability!)

Second, and more importantly, we are actively working on getting more visibility in the community. We want our church not to be seen as a private building and a private institution doing private events for private people. We want to show our community radical hospitality. That’s why the event will be free. And we want to show that that Jesus can love the blues. Most of the music will be old-fashioned Piedmont blues which actually began in the 1920s based off of ragtime rhythms and a fusion of gospel music and stride piano music. Many of the tunes were spiritually based and played in churches. We will be serving up some Jesus along with BBQ and Blues!

BBQ Bob played in a small church just about 1/2 mile down the road from our church and probably played in our church, even though he was African American and Walnut Grove was at the time primarily white. One of the tunes he played and recorded was “Jesus’ Blood Can Make Me Whole.” When he was buried, his song “Mississippi Waters Blues” was played at the graveside, so during the dedication ceremony we are having Mudcat and Jontatavious play the same.

BBQ Bob’s song “Motherless Chile Blues” won Eric Clapton a gold record in 1994, but it’s only just one of his songs that became blues standards.

It’s a sound thing (theologically) to recount the past before we move into the future. Paul did it in his sermons in Acts — the author of Hebrews did as well. By remembering the past we can develop a fresh vision for our future. You can’t know where you can go until you remember where you’ve been. We hope to take this part of the legacy of the church and use it as a way to reach deep into our community.

In addition — it’s not going to be a bad fundraiser. We are going to sell BBQ sandwiches, chips and drinks. We plan to use some of the funds to kick start our after-school care program for underprivileged children in our community. Our after school program is planned for next school year and will provide a healthy snack for kids who may not have dinner waiting at home at night, homework help and enrichment activities like art, dance and music.

So, as we try something new at Walnut Grove, all are invited to bring a blanket or a lawn chair and be prepared to have a great time!

From Wikipedia:
Robert Hicks, better known as Barbecue Bob (September 11, 1902 – October 21, 1931), was an early American Piedmont blues musician. His nickname was derived from his working as a cook in a barbecue restaurant.

Hicks was born in Walnut Grove, Georgia. His parents, Charlie and Mary Hicks, were farmers. He and his brother, Charlie Hicks, together with Curley Weaver, were taught how to play the guitar by Curley's mother, Savannah "Dip" Weaver. Bob began playing the 6-string guitar but picked up the 12-string guitar after moving to Atlanta, Georgia, in 1923 or 1924. He became one of the prominent performers of the newly developing Atlanta blues style.

In Atlanta, Hicks worked at various jobs, playing music on the side. While working at Tidwells' Barbecue in a north Atlanta suburb, he came to the attention of Columbia Records talent scout Dan Hornsby. Hornsby recorded him and used Hicks's job to publicize his records, having Hicks pose in chef's whites and hat for publicity photos and dubbing him "Barbecue Bob.” In his short career he recorded 68 78-rpm records.  His first record rapidly made him a best-selling artist for Columbia Records.