What Story is Driving You?

For the past several months, I've spent a lot of time walking pastors, friends, and church leaders through the process of change and transition. It's taken me some time to get a handle on a process, and it's still a work in progress, as I've made some missteps along the way, but I've come to realize the importance of going slow to go fast in helping congregation walk through the wilderness of change.

Sounds simple enough, right? But it isn’t. It ranks as number three on the hardest thing that I’ve ever had to do list right behind two kidney transplants, and a failed attempt at starting a new church from the ground up.

Whether it’s dealing with the gap between an aging congregation and failed attempts of attracting younger people or trying to sure up an operating budget in the midst of shrinking resources, in every case my work continues to come back to how to navigate the change. Many of us know firsthand that all sorts of heightened feelings erupt when we experience any disruptive change. Most of our feelings circle around three common themes: loss of control, interruption of power, and fear of failure.

Admittedly, while I know from the Exodus story and my own experiences, that transitions are hard and I  wasn't surprised by how the congregations responded in three predictable ways. What I didn't anticipate was how my feelings to what I was experiencing was affecting me. 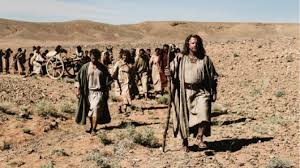 Not being able to name these feelings and wanting to learn more about the emotional responses during transitions, led me to enroll in a year-long certification program that focuses on guiding people and congregations through the transition process through an organization called Liminal Space outside of Seattle, WA. My continuing education work with Jon DeWaal and Ron Carucci, the co-leaders of the program, is helping me to find the language to unearth my wilderness feelings of loss of control, interruption of power and fear of failure that has been in opposition to the change that I'm trying to help navigate.

As the District Superintendent, I believe that I’m the one who’s supposed to help congregations through change. I care deeply about the congregations that I work with and desperately want them to succeed by being healthy and vital. It’s sobering to discover that rumbling underneath my behavior and desire to help churches through the wilderness of change is what Ron and Jon calls an “operative narrative,” the unconscious and continuous playing metaphorical CD that represents the story that’s driving me.

Okay, before I lose you on the psychology “mumbo jumbo,” let me put it to you plainly: I’m becoming aware of the power of my childhood story of being laughed at for being a misfit has created an “Expert” story that affects my ability to guide churches through the change process.
For me, the Expert is a lot like the animated character Sandy Cheeks from the animated TV series SpongeBob Square Pants. I’m not sure what to make of my image being a female squirrel living under the sea, but hey, it could be worse, it could’ve been Patrick Star! 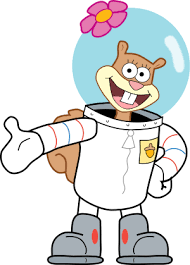 Sandy, one of SpongeBob’s friends, is a squirrel from Texas who lives in a Treedome, the nearly impenetrable airtight 35-foot tall polyurethane dome that keeps water out. And other than Mr. Krab’s sperm whale daughter, Pearl Krabs, Sandy’s the only mammal living on the bottom of the Pacific Ocean. At times during the show, Sandy’s cast as a misfit, being the only creature in Bikini Bottom that cannot breathe underwater and she's becoming the laugh butt of jokes. And yet, Sandy's the smartest and strongest character in Bikini Bottom. She's an expert scientist, inventor, and a black belt in karate.

Even though it’s a cartoon, Sandy Cheeks represents the best image for my expert operative narrative. Through Sandy’s eyes, I can see how I can sometimes come across as an expert in my leadership style. I'm embarrassed to admit that there are times where like Sandy Cheeks, my only goal is to understand the world through seeking out information. Unfortunately, like Sandy, my biggest fears are being laughed at, misunderstood and being misled.

There's a negative impact of being the "Expert.” And if I’m honest with myself, there are also times where I feel judged for my performance or lack thereof, and not knowing what I’m supposed to know. Like Sandy, during these times the expert impacts my ability to ask for help or put words to feeling/needs/desires with those around me.

Simply put, a pastor’s ability to lead change in the church depends mostly on his or her ability to change themselves; a leader must first lead themselves before he or she can influence others. And as I’m discovering in the certification program, this change begins with identifying and rewriting those operative narratives that are always playing just below the surface of our awareness. Lasting personal change that creates change in the church requires us to face the tapes playing in our heads. And most of the times, these tapes lead us to exasperating confessions that sound like, “Why do I keep doing that?”

Thanks to some trusted friends, I’ve learned that just because I declare that I do things I shouldn’t do doesn't mean that I'm self-aware; it just says that I'm acknowledging that others have told me that specific behavior is troubling and that I wish I didn’t do it. I haven’t done anything to change the behavior. Genuine self-awareness requires that I continue to dig deeper and uncover the real answer to why I keep doing it and then actually work to stop doing it.

Helping churches through transition and change is hard work, and it's revealed some painful stories that I've forgotten. Like God use the wilderness to cure the Hebrew people complaining about lack of food, as they were required to dig up their daily bread, I’m still digging deeper to uncover how my Sandy Cheek Expert narrative gets in the way of helping others through transition and change. I am trusting that God's metaphorical cloud by day and fire by night that led Israel to rewrite a new story, that God's grace will allow me to revise my Expert script. Will you join me in this process? What's the story driving you?