Redistricting in North Georgia for Mission and Stewardship

Amanda Setili, a growth consultant who has worked with Delta Air Lines, The Home Depot, UPS and others, helped North Georgia Conference leadership develop a new district structure. Here she shares about redistricting in the North Georgia Annual Conference.

With an aim toward optimizing mission, ministry, and stewardship across the North Georgia Annual Conference, our team of Conference leadership developed a proposal to restructure districts from 12 to 8. Working with a strategic growth consultant, new district lines were drawn in a mission-focused manner more reflective of today’s North Georgia Conference and the communities we serve.

This new structure was thoroughly reviewed and unanimously approved by the Conference Council on Finance and Administration and by the Cabinet. Orientation to this structure has also been provided to all District Lay Leaders, District Committees on Superintendency, and District Administrative Assistants.

The structure was formally presented to the 2020 North Georgia Annual Conference, and information, including a video presentation from our consultant, was available for several months in advance. 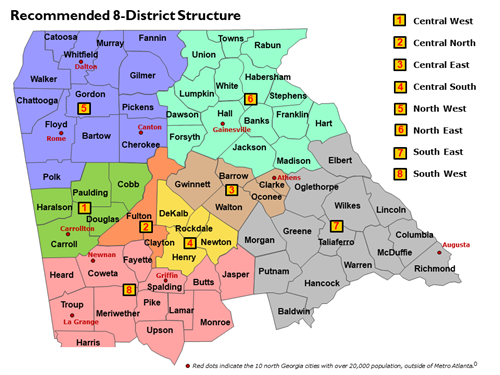 Why reduce the number of districts?
The current district structure was created during a far different era in North Georgia. Realigning our districts in a more strategic, mission-focused manner reflective of today’s North Georgia Conference is the responsible and most opportune path to pursue.

What has changed since the district lines were last drawn?
There has been great change since our current districts were established. Cell phones, email, and video conferencing have become commonplace communication tools. There has been a rise in ubiquitous public meeting spaces (like Starbucks). There are new highways with resulting new traffic patterns, new neighborhoods, and new communities. There is greater population diversity. There have also been shifts in worship attendance patterns.

What is the timeline?
It will take 1 year for the new district structure to fully go into effect. While we will accelerate planning for and begin living into this new structure in July, the proposed date of full implementation is July 1, 2021.

What are the financial implications?
It is estimated that the change will reduce Conference expenses by more than $800,000 annually.

What does this mean to my local church?
Your local church will still be part of a district and still have a district superintendent. Being part of a more efficient and balanced district, that better reflects the regions and geography of North Georgia today, will be an asset to local churches and pave the way for an even more connectional, collaborative, and relevant approach to our mission of making disciples for Christ for the transformation of the world.

What does this mean for clergy?
With a more balanced number of clergy in each district and more similar contexts for churches in the same district, clergy should expect better synergy and an increase in opportunities for collaboration.

What is my new district?
The new districts are divided along county lines. Find your county below to find your district: