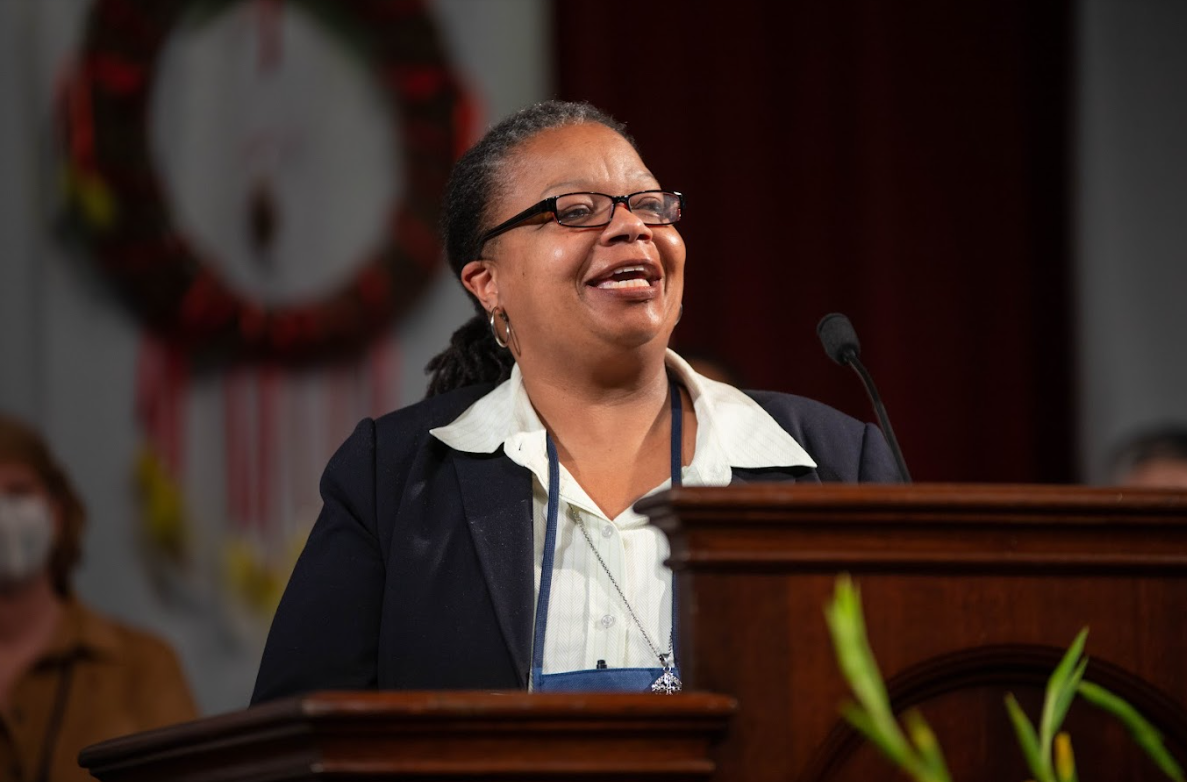 It took the entire afternoon and into the evening, but on the 25th ballot of the 2022 session, the Southeastern Jurisdictional Conference elected South Carolina’s Dr. Robin Dease. She is the third bishop and final bishop to be elected by the delegates to this session.

Dease’s 206 votes put her over the edge in the election, which had been close most of the day as she and South Carolina nominee the Rev. Ken Nelson were closely tied, sometimes with Nelson in the lead and sometimes Dease.

Swallowing back tears, Bishop-Elect Dease thanked the body for the honor, noting her parents had all joined the Church Triumphant and most of her 13 siblings as well, with those remaining physically incapable of being there.

“But you are my family,” she said to resounding applause. Then, looking to Nelson in the audience, she added, “And Ken is my brother and my friend.”

Throughout her career, whenever she had the opportunity to lead or serve somewhere new, she’d run home to her parents and celebrate the news, whether that was running an account, graduating from seminary, getting appointed to a church, or becoming a district superintendent.

“They’d say, ‘Now don’t go down there and make us shamed,’” Dease said. Looking again to the room standing in her honor, she said, “My commitment to you is: I will never make you shamed.”

Long day of elections
Dease’s election was by some accounts a surprise, as she was a write-in nominee whose name first appeared on Ballot One Wednesday morning, Nov. 2, after which she declined the nomination.

On Thursday, Nov. 3, in a session presided over by South Carolina Resident Bishop L. Jonathan Holston, South Carolina, the early afternoon saw the slate dwindle to four, the Rev. Ken Nelson and the Rev. Edith Gleaves, as well as two write-in candidates, Dr. Zachery Beasley from the Mississippi Conference and Dr. Robin Dease from South Carolina. The Rev. Sharon G. Austin, The Rev. Sharon Bowers and The Rev. Amy Coles all withdrew their names from the slate early Thursday afternoon, as did Dr. Byron Thomas, who had been voted back on the slate and then withdrew a second time.

By 5 p.m., with the withdrawal of Gleaves, the slate contained just three names—Nelson, Dease and Beasley.

Ballots 15-25 were held throughout the afternoon as the slate appeared to nearly even out among Dease, Gleaves and Nelson, each garnering roughly a third of the total votes. Between ballots, the body watched videos on various agencies, college and retired bishops.

Several stood to call out issues of both racism and rumor-mongering among the delegates that they believe were interfering with the voting process, urging the people to stop contaminating the process.

As Thomas stated to applause, practicing the lordship of Christ is different from believing in Christ.

“We can’t do whatever we want to and call it Jesus,” Thomas said. “I ask this body please not to put out any salacious information about people in order to get our candidate across the line.”

Midway through voting, after results of Ballot 19 had been announced, Holston asked to be recused from presiding because two of the nominees were members of his conference, South Carolina. He invited Bishop Debra Wallace-Padgett to lead in his stead.

Body votes down motion for four bishops instead of three
Next, under Wallace-Padgett’s presiding, Steve McAlilly, lay delegate from Mississippi, stood and acknowledged the voting impasse, which he said “concerns and grieves me deeply.”

In an effort to remedy this as well as racial concerns and workload troubles, he made a motion to reconsider the election of three bishops, instead changing the number to four.

“I’m an old White guy, and I grieve the damage we’ve done over the years in the name of God,” McAlilly said. “God is the God of what-ifs … what if we elected two more bishops and began to right some of the wrongs done over the years?”

Robert Grizzard, Florida lay reserve delegate, spoke against the reconsideration, noting this might not be an impasse but a flexing point. He also questioned whether it was in order to do this so late in the voting process—that is, that it should have been reconsidered before any voting was done.

Wallace-Padgett read Rule 27 aloud and ruled it was indeed in order.

The chair of the Committee on Episcopacy, Steve Furr, noted it would cost about $1 million over the quadrennium to fund an additional bishop.

Grizzard appealed the ruling of Wallace-Padgett, but the appeal failed.

Then Wallace-Padgett called the vote on reconsideration, which also failed. The number of bishops will remain at three.

Immediately after this, Ballot 20 was held, then Ballot 21. Neither resulted in an election.

After Ballot 21, Gleaves withdrew her name from the slate, citing a wish to help the conference move forward—hopefully to a better day and a better time.

“It has been an honor,” Gleaves said. “It also breaks my heart to see how far we haven’t come. We’ve come a mighty long way, and we’ve got a mighty long way to go. I believe someday we’ll get there because this church belongs to Jesus Christ and not to us.”

Ballots 22-25 continued throughout the late afternoon, and Dease’s election came at 6:07 p.m.

Hope in the storm
SEJ also took time to lift up prayer, compassion and awareness for those impacted by recent storms, including the devastating floods in Kentucky and Hurricane Ian in southwest Florida.

Florida Bishop Kenneth Carter stood to offer prayer about the disasters as well as in the SEJ balloting process, thanking God for being among us in midst of the storm.

Kentucky Bishop Leonard Fairley also offered prayer, noting he’s never been so grateful for the green shirts of disaster responders. Church is at its best when helping those who are hurting, Fairley added.

“There is hope even in the midst of the storm,” Fairley prayed.

SEJ continued Thursday after a dinner break with the evening session.