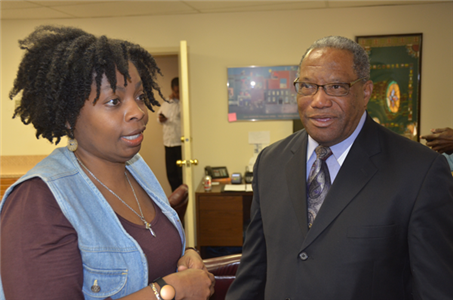 The Rev. Cynthia Moore-Koikoi, left, superintendent of the Baltimore Metropolitan District, speaks with the Rev. Cordell Hunter, Presiding Elder of the Eastern District of the African Methodist Episcopal Church, at Bethel AME in Baltimore. Photo by Erik Alsgaard

Fire from burning cars lit some of Baltimore’s streets Monday night, April 27. Looters seemed to strike indiscriminately. As darkness began to fall that night, fear of what lay ahead between rioters and the police force grew.

The Rev. Cynthia Moore-Koikoi experienced some of this fear. But when you’re afraid, “you pray and you march on,” she said.

Moore-Koikoi, superintendent of the Baltimore Metropolitan District, prayed and then joined the city’s other clergy in a march for peace. Putting themselves between bottle-throwing demonstrators and lines of police officers with pepper spray, the pastors hit the streets.

The goal, Moore-Koikoi said, was to ease tensions and bring calm to people on the streets. Local newscasters noted the success of their efforts.
Along the way, Moore-Koikoi learned she had a guardian angel of sorts – a young man who belonged to the Crips gang. He and other gang members, some from two other rival gangs, made sure neither the police nor the rioters bothered the pastors.

When they returned to New Shiloh Baptist Church, the pastors invited the gang members in for conversation. “We ended up confessing that we had not done enough to engage them in the past,” Moore-Koikoi said. “We promised future conversations.”

It was one of those surreal and unlikely moments that stuck out in the darkness of the day’s event.

Most news accounts say the rioting began with a group of school students who went looting, en mass, near Mondawmin Mall in Baltimore. Events escalated from there.

Baltimore police report 235 arrests were made during the night’s violence, 20 officers were injured, and the fire department dealt with fires in 144 vehicles and 15 buildings. After a state of emergency was issued, the governor sent the Maryland National Guard in to patrol the city.

While the events have been tied to the death of Freddie Gray, who died of a spinal cord injury in police custody, many church and city leaders were quick to point out that the violence in no way honored Gray’s legacy, nor made life any better for the city’s poor and marginalized.

As a result of the violence, Baltimore schools were closed April 28. Recognizing that many of the city’s children receive free meals in school and would go hungry without them, some churches, like Metropolitan UMC, on the city’s northwest side, opened their doors as a refuge for the neighborhood children.

“We’re organizing around serving breakfast and lunch while the children aren’t in school,” said King. Dozens of volunteers swarmed the church’s basement, helping to prepare brown-bag meals that were driven out to the community.

One neighborhood mother said that parents in the area were afraid to let their children out doors, which helped to explain why more children weren’t at the church.

King looked at the events of Monday night as the culmination of years of mistreatment and poor police relationships in the community.
“But there’s a bright, silver lining in all this,” he said. “We had a sit-down conversation with gang members at New Shiloh Baptist Church,” the site of Gray’s funeral. “Those conversations will continue.”

King said that members of gangs were standing between rioters and police, helping to make sure more businesses weren’t vandalized.
“Everyone has God’s spirit in them,” said King. “There’s a great coming together that’s underway, but there’s still work that needs to be done.”
At Bethel AME Church, around the corner from Sharp Street Memorial UMC in Baltimore, Mayor Stephanie Rawlings-Blake honored the churches that opened their doors to the city’s children, a quarter of whom are “food insecure.” She hailed the 60 Teach for America participants who volunteered their time feeding and playing with the children.

The riot is only a small part of Baltimore story, stressed the mayor. The best parts of the city are made possible by those who “lead with their hearts.”
City and religious officials are hesitant about predicting the immediate future, especially in light of a report on the cause of Freddie Gray’s death, expected to be released on May 1.

The Rev. Willis Johnson, of Wellspring UMC in Ferguson, Mo., flew into Baltimore Monday to be with other United Methodists in the connection living through some of the tensions his community lived through when a white police officer shot a young black man.

Johnson sees many conditions in Baltimore that “are a mirror image of our early days in Ferguson. People are finding their bearings,” he said. Johnson advises United Methodists in the Baltimore-Washington Conference to “be ready to answer the calls of our brothers and sisters. We’ll love them through this situation,” he said.

Tuesday night, about 30 clergy from throughout the Baltimore-Washington Conference gathered at Metropolitan UMC, Moore-Koikoi wrote in an e-mail. The clergy were going to march to New Shiloh Baptist Church for a larger gathering of clergy, but that meeting was cancelled, she said.

“But our clergy decided they wanted to be with the people,” she said, “so we went to Ames Memorial and Rodney Hudson led us into the community. We joined an outside worship service and then went to see the community parade. It was fabulous.  When we walked back to our cars several clergy surrounded Rodney to work out details about how their churches could support Ames as they work in the community. That was also beautiful to see.”

Moore-Koikoi agrees and knows that the church’s response to Freddie Gray and charges of injustice in Baltimore will last long beyond the headlines.

What’s needed next, she said, is for churches to connect with the community in ways that the community sees the church as a resource, not just a property owner in their community.

“It’s about relationship,” said she concluded. “We are all in this together.”

It’s also, Moore-Koikoi admits, about being afraid and marching on anyway.