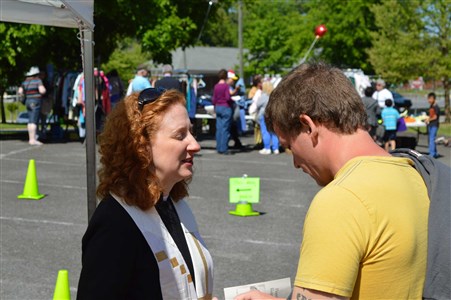 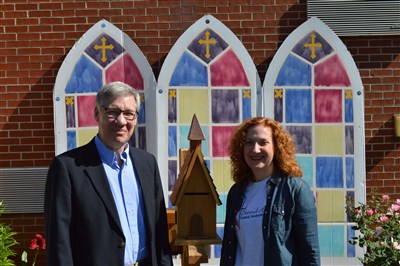 Rev. Beth Sanders of Second Avenue UMC in Rome noticed that the church parking lot was becoming popular with those avoiding traffic, turning around, or even eating their lunch. Instead of treating them as trespassers, the congregation installed a drive-up prayer box where visitors can write and submit their prayers.

Being a church with a sense of humor, the pastor inaugurated the box with “A Wing & A Prayer” on Saturday, May 2, where passersby could pull in for free chicken wings and prayer time with Sanders.

“This is a way to show that our doors really are always open,” says event accomplice and lay member Beth Gibbons, who was responsible for cooking the 70 pounds of chicken wings given away that day.

The idea behind providing a free lunch was to upgrade the event from a drive-thru ministry to an opportunity to fellowship with their neighbors.

The church was unsure of how the event would be received by the community, but they discovered a crowd already gathering for the prayer box service, eager to place their prayers inside the small birdhouse-shaped structure. Afterward, Sanders prayed over families nonstop for more than an hour. It was evident to on-looking volunteers that participants were relieving heavy burdens to their pastor, and appeared to leave with lightened hearts.

“Second Avenue wants to be the place you can come to unburden yourself of some of that stress and give it over to God,” Sanders said in her column the week before in the Northwest Georgia News. 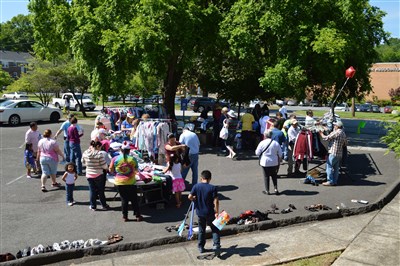 Many clothing items were also given away that day, mostly suits, nice dresses, and shoes. The congregation hopes that providing those in need with nice clothing will increase their confidence while applying for job interviews or looking for places to worship.

Shoes were such a big need that they plan on focusing their next prayer event around the necessity. Sanders and Gibbons were particularly moved by an e-mail sent by a school counselor who received the leftover shoe donations. She wrote to say that every pair went to a child in need, one who even said his toes “never felt so free.”

While serving their guests, they also invited several interested families to their Smart Lunch, Smart Kid event, where children can come receive free lunch in the summer season.

“We are called to be a community of faith,” Sanders says, “not just to our church, but our neighbors too.”

The event also encouraged others to interact with those different from them, something Sanders also believes Christians are called to do.
“It just keeps coming back as a blessing,” Gibbons adds.

Congregations often struggle to find members to give testimonies, but the next Sunday several helpers volunteered to share their experience at “A Wing & a Prayer”, and how they felt the spirit moving through the parking lot.

“I do not recall any event,” Gibbons says, “where we had such a church-wide effort, from chopping celery to sorting clothes.” 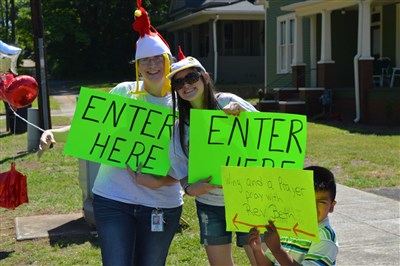 Both Sanders and Gibbons believe the key piece to planning an event like this is steady planning and knowing who to ask for help. While debating how to handle car and foot traffic, the planning team decided to call their local law enforcement for tips and safety precautions. Pre-organizing volunteers aided in making the day less stressful and more enjoyable for everyone involved.

“We let this idea ruminate until it was ripe,” Sanders explains. “We brought it to life together.”

In the end, the people of Second Avenue UMC succeeded in their goal to demonstrate love while making people laugh... In chicken hats!