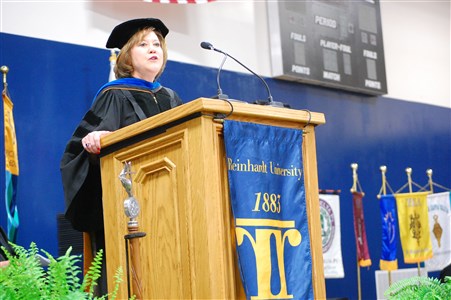 Reinhardt President-Elect Dr. Kina Mallard was the keynote speaker for the University’s commencement ceremony on May 2, 2015 at 9 a.m. More than 250 students participated in the ceremony at the James and Sis Brown Athletic Center on Reinhardt’s campus in Waleska, Ga.

On Feb. 12, 2015, the Board of Trustees of Reinhardt University announced the selection of Dr. Kina S. Mallard as the institution's 20th president. She was chosen by a vote of the full board, and she will assume the office on May 16, 2015.

An experienced academic leader, Mallard comes to Reinhardt from Carson-Newman University, Jefferson City, Tenn., where she has served as executive vice president and provost since 2012. She was Carson-Newman’s provost and vice president for academic affairs from 2009 to 2012.

Prior to Carson-Newman, she was at Gordon College, Wenham, Mass., as academic dean from 2005 to 2009 and at Union University, Jackson, Tenn., as associate provost for faculty and academic development from 2003-2005, Center for Faculty Development director from 1998 to 2005 and Communication Arts Department chair from 1990 to 2003.

Her teaching career began in 1982 as a graduate teaching associate at the University of Tennessee, Knoxville, Tenn.  She also taught fine arts at North Greenville College, Tigerville, S.C., in the mid-1980s.

Mallard has a Doctorate in Communication and a Master of Arts in Organizational Communication from the University of Tennessee, Knoxville, Tenn., and a Bachelor of Science in Speech and Theatre from Middle Tennessee State University, Murfreesboro, Tenn.

Many of her published works address academic leadership, management, communication, and private and Christian higher education A dynamic speaker, she has given presentations on faculty development, assessment, leadership, advising or instruction.  In addition to being the keynote speaker at the Women in Higher Education in Tennessee Conference in 2012, she has also presented at conferences for the Council for Christian Colleges and Universities, the Council of Independent Colleges, the National Conference of Academic Deans, the International Christian Community for Teacher Education, the Teaching Professor, and the International Society for Exploration of Teaching and Learning.

Only two students are selected by the Reinhardt faculty to participate in the Commencement Ceremony based on their academic achievement, activity, leadership, representation and faculty references. They must also represent the character, integrity and mission of Reinhardt University. The students that filled the speaking roles this year were Maria Fernanda Flores ’15, who provided the student address, and Isabella Novaes ’15,  who gave the benediction.

For more information about Reinhardt’s Commencement Ceremony or to watch it, visit www.reinhardt.edu/streaming

About Reinhardt University
Founded in 1883, Reinhardt University is focused on shaping lives and building futures. As a private comprehensive university grounded in the liberal arts and affiliated with the United Methodist Church, Reinhardt offers 43 graduate and undergraduate programs, ranging from business and education to music and theater.

Reinhardt has two locations -- a residential main campus in Cherokee County in Waleska, Ga., and a center for adult learners and police academy in Alpharetta, Ga., -- as well as selected programs in Cartersville and Canton, Ga. Additional attractions on the Waleska campus include the Falany Performing Arts Center and the Funk Heritage Center.