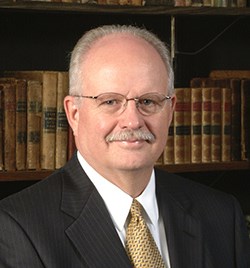 Reinhardt’s 19th president, Dr. J. Thomas Isherwood, announced he would be leaving the University on June 30, 2015. He was selected as Reinhardt’s president by the institution’s Board of Trustees on April 2, 2002, and he had served in the office since July 1, 2002.

After discussing his decision with the Executive Committee of Reinhardt’s Board of Trustees, he informed the entire board, as well as faculty and staff, via email.  “I am very proud of the work we have done together, and I will always be thankful that you have given me the opportunity to serve you and our students,” he said.  “Next year will be my 13th at Reinhardt, and I believe it is a good time for change.  In 2015 we will be completing our second meaningful five-year plan, and I believe the University is in a positive position for even more success.  I am very confident that the announcement of this leadership opportunity will draw interest from excellent and qualified people across the United States.”

Board of Trustee Chair William G. Hasty, Jr. commended Isherwood for the job he has done as president. “Tom Isherwood has been a focused and effective leader for Reinhardt,” Hasty said. “During his tenure, even though the economy has made success very difficult to achieve for small private institutions of higher education, Reinhardt has enjoyed increased enrollment, program expansion and loyal financial support. I look forward to continuing this positive momentum as we prepare for a change in senior leadership.”

A presidential search is often a year-long process, which was part of Isherwood’s rationale for an early announcement. “The search for new leadership is one of the most exciting times in the life of an institution,” Isherwood said. “I want to give the Board full advantage of an early announcement so that they have time to engage the entire Reinhardt community in this process.  I am confident that the trustees will exercise this responsibility with wisdom and grace.”

Since Isherwood’s arrival, Reinhardt has experienced much growth. Reinhardt’s student body has grown from 1083 to 1402, fund raising has brought in approximately $42.7 million, and at least 20 buildings or facilities have been built or significantly renovated.  Academic program offerings have expanded from 17 to 41, the number of full-time faculty has grown from 54 to 80, and the number of intercollegiate sports has grown from 10 to 17.  Graduate degree, online programs and a Police Academy have been added, and in 2010, the institution name was changed from Reinhardt College to Reinhardt University.

“When I arrived, Reinhardt did not yet have the program diversity we needed,” Isherwood said. “Our program growth, as well as our offerings for working adults and graduate students, was prompted by faculty creativity and hard work. As we have added faculty, we have looked for caring instructors with solid credentials, creativity and experience -- professionals who emphasize a commitment to teaching, mentoring, community service and scholarship.  We also invested in the performing arts, athletics and the sciences.  Our fund raising successes have made all this expansion possible.”

Isherwood doesn’t like the word “retire” and doesn’t plan to coast during his remaining months as Reinhardt president.  Isherwood and his wife, Bettye Jo, have a home in Big Canoe, Ga., and they plan to remain in the area. “We will continue to be involved in our community,” he said. “We have made wonderful friends and have found Big Canoe to be an exciting and welcoming place to live.”

In his email to faculty and staff he stated, “While we will have time in the next year to reminisce, we will also have a great and busy year as we together prepare the University for the future. I have been humbled and honored to be president of this wonderful place and to serve with you. I plan to leave with energy and enthusiasm.”