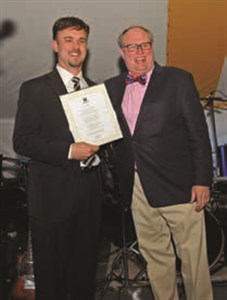 Rev. Matthew Nelson of Inman Park UMC received a special honor during one of the community’s most highly anticipated events of the year.

The Inman Park Festival kicks off with the Butterfly Ball on the last Friday of April, during which the Joel Award is presented to a handful of committed citizens. While the church as a whole once received this honor in 1978, 2015 was the first year that the pastor was individually awarded.

The Joel Award was created to pay homage to the designer of the Inman Park community, which was the first suburb planted in the Atlanta area.

After being labeled as a bad part of town, the community came together in 1971 to create the Tour of Homes, opening up its collection of beautiful Victorian style houses to be viewed by the public. This tradition still takes place during the festival each year.

The Joel Award is given to those who give back to the community through service and leadership. 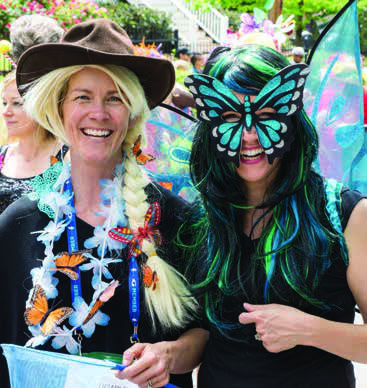 “You just get to live with people, and share their stories and their front porches,” Nelson says as he explains some of what he appreciates about Inman Park. “There’s a life we live together in community, expressed by the love and grace of God.”

He finds the key ingredient of a healthy community to be authenticity. He and the congregation aim to make the church a common space for all people.

“Our churches need to value the unique characteristics of the people that make up their communities,” he suggests.

Nelson’s enthusiasm for forming new relationships is what resulted in his name, among four others, to be called during the Inman Park Festival’s Butterfly Ball.

“I knew I was potentially moving to a new appointment in June, so to be receiving this award was incredibly humbling,” says Nelson, who was completely surprised to hear his name called.

Inman Park’s mascot, the butterfly, symbolizes the resurrection of new life. Both the community and the church celebrate Nelson’s contributions to Inman Park. They are also making room for new life and direction, as the congregation and its neighbors prepare to welcome a new pastor in June.