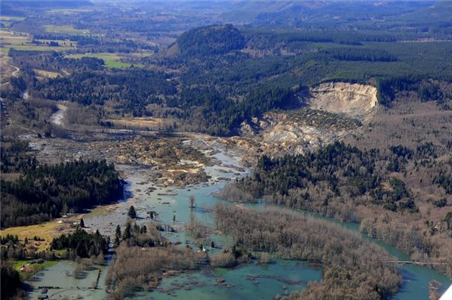 Last week’s devastating mudslide near Oso, Wash., took its toll on rescue workers who have diligently searched for survivors underneath a square-mile of debris and muck, which in some parts was 30 to 40 feet deep. Amoung those workers is Lieutenant commander Rev. Jennifer Bowden, Command Chaplain, and a United Methodist who served at Dunwoody UMC during seminary at Candler School of Theology and afterward under full appointment.

The mudslide claimed the lives of 21 people, and 11 or 12 people are still missing, according to recent news reports.

The Navy lost a Commander and his wife and a Chief and three of his four children. The chief's surviving child was thrown from the house and was rescued from the mud.

"Because I am Navy, my responsibility is to the two Navy families," explained Bowden.

Rain continues to hamper the recovery effort and there is still the potential of more mudslides. Because of the terrain and mud, the equipment that would most helpful is not able to be used. On several occasions the work has been halted because of the rain.

Bowden has worked nearly non-stop since the incident last Friday. She is mentally and emotionally drained and she asks for our prayers.

Thirteen years ago she left Dunwoody and entered the Navy to become a Chaplain. During her Navy years she has served all around the world with Navy and Marine units. Bowden just arrived in Everett at her new assignment with Destroyer Squadron Nine during the last two months.

She has been involved in clean-up and support operations on numerous locations before this including a Hurricane in Guam, Hurricane Katrina in La., Sandy Hook Elementary shooting, the Boston Marathon Bombing, and others.

She said nothing has quite prepared her for this tragedy.

"Every day I go in it's surreal," said Bowden.

UMCOR is responding with an emergency grant to the Pacific Northwest Annual Conference to provide temporary housing needs, case management support, and spiritual and emotional care for affected families.

Bishop Grant Hagiya, of the Pacific Northwest Conference, called for prayer support following the disaster. The conference has asked churches to start collecting monetary donations for those who lost possessions and homes in the mudslide.

Please pray for healing, recovery efforts and strength for the days ahead.

In addition, please pray for those affected by an 8.2 magnitude earthquake which struck off the coast of northern Chile yesterday, April 1. The quake triggered a tsunami which hit the shore with 6-ft. tall waves. About five people have died. UMCOR is monitoring the situation and has made contact with local partner EMAH, the humanitarian assistance arm of the Methodist Church of Chile.