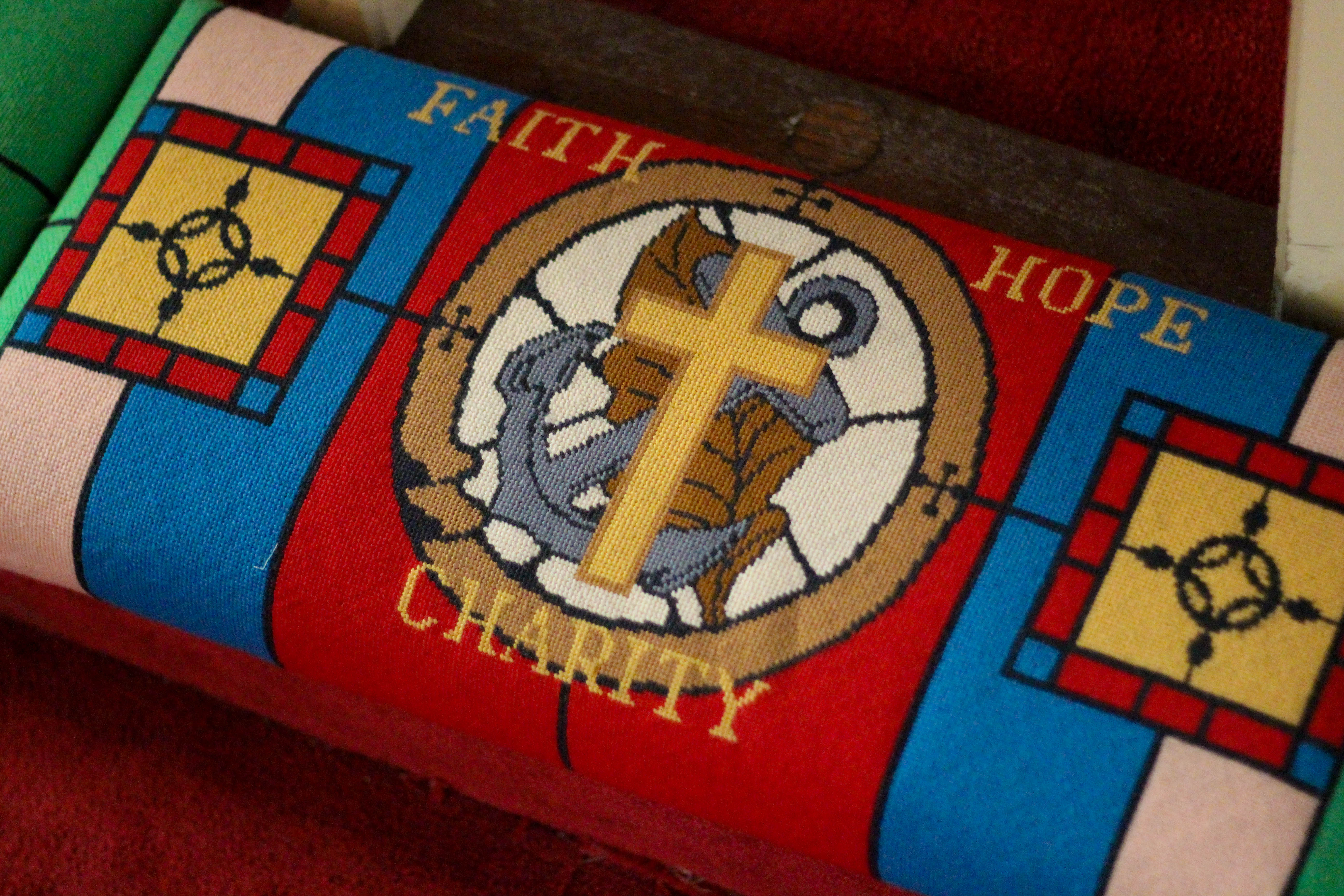 When Luncino Crawford arrived at Fort Street in 2005 with her husband Dr. Rev. Joseph Crawford, she felt different from other pastors’ wives. After being involved at a district level, she was eager to embrace an active role with the local church.

Upon arrival, she noticed there was something missing in the sanctuary.

Crawford shares, “when visiting churches, I was always drawn to the kneelers.”

She wanted handmade kneelers, but she didn’t know where to start until one day in Decatur she found a yarn shop with needlepoint hung around the store. The employees had already assisted a church in the same project, Fort Street’s sister church, Glenn Memorial.

During a meeting in the shop with Glenn Memorial, Crawford had a few doubts as needlepoint veterans shared the expense of the project, the importance of keeping clean hands, choosing the right yarn and stitching patterns, the difficulties some may have with seeing, along with possible allergic reactions.

“At first we just thought no, no, no. No money, no one to sew,” recalls Crawford. 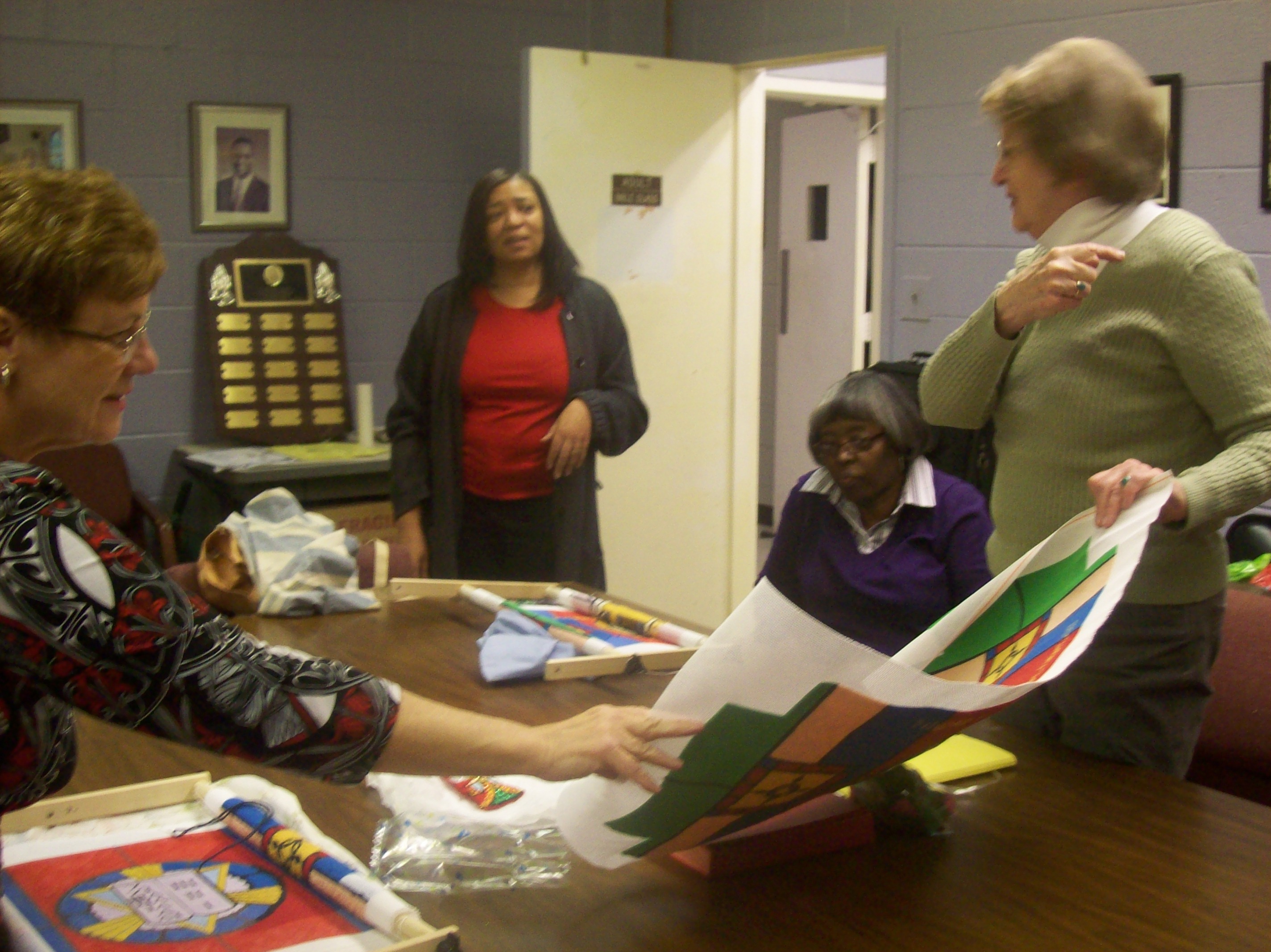 With reservations she hosted an introductory meeting and was surprised by the amount of those interested, some of which seemed incapable at first glance. Many volunteers had difficulties seeing or could not sit or stand for long periods of time, but their willingness and passion made them ample candidates.

The most helpful participant was Rosemary Weaver, a sewing expert at 84 years old. She and her daughter Susan Ford were fully committed during the project. They guided the group throughout the process, correcting stitch patterns and holding everyone accountable for sewing daily.

“They loved this relationship,” says Glenn Memorial’s Carole Adams with whom Crawford formed a personal sisterhood during the length of the project.

The Weavers maintained a connection with the group until they both passed away. Susan was even baptized on the Pentecost before she passed of lung cancer, her mother passing two years later. Without their help, skills and enthusiasm, the project would have fallen flat.

“We would not be able to accomplish this today,” says Crawford. 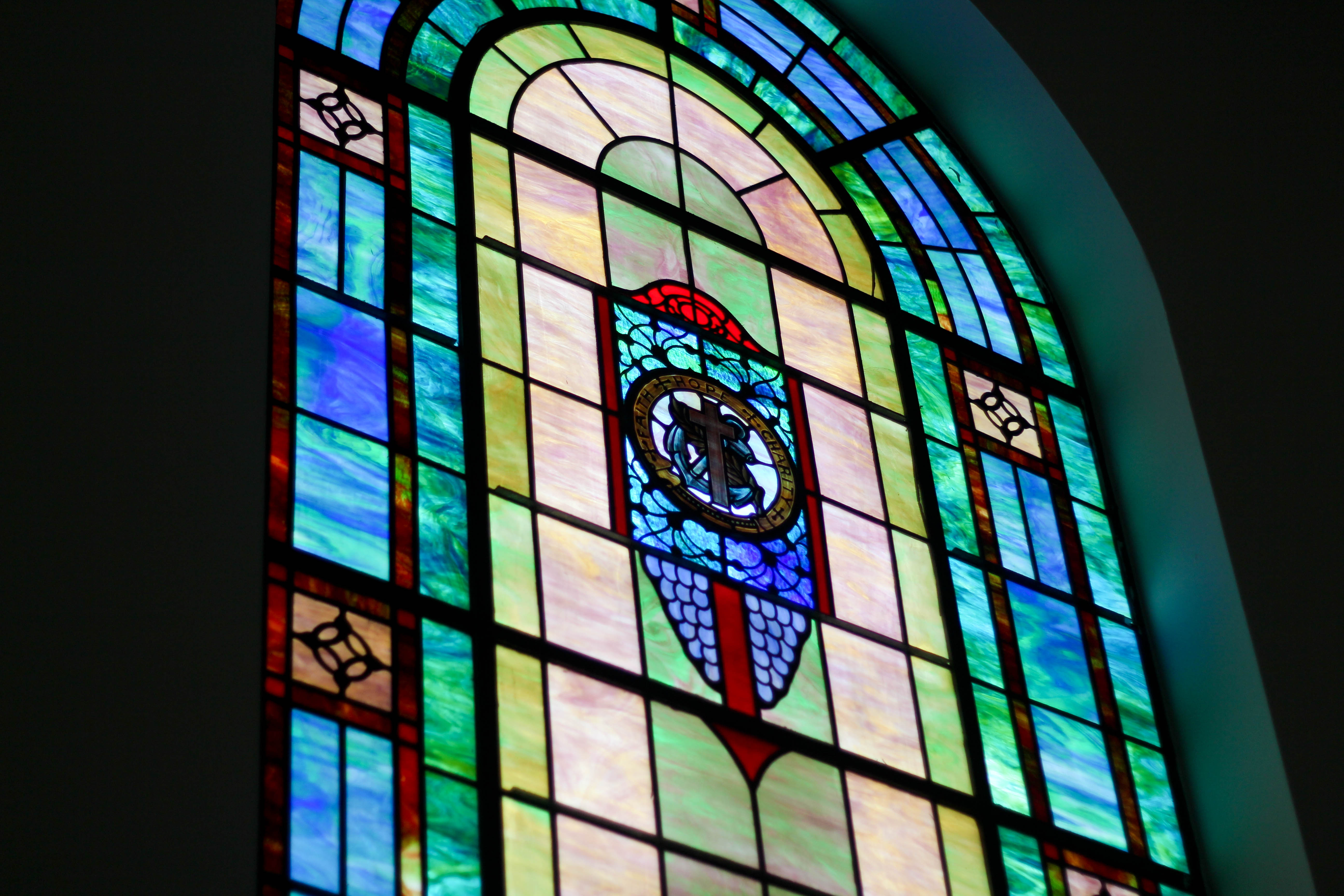 Not only were the Weavers an important asset, but also their needlepoint designer, Nancy Keating, who now lives out of state, played a large role. The needlepoint process begins with selecting an image for the designer to paint on a piece of canvas, allowing sewers to follow the path as they stitch on top of it. When asked, Crawford knew the exact images she wanted, the stained glass in Fort Street’s sanctuary.

“It was obvious to me”, she says. “Its connects them to the building.”

It was not a quick project. It took about four years to complete the kneelers. Having to use the most durable and one of the most difficult stitch patterns, the process required patience and consistency.

Before anyone could even start on a kneeler, each woman had to complete a test project, a needlepoint Christmas ornament now used on the Fort Street Christmas tree.

Each person was then given a painted canvas to sew, including Crawford who completed the center kneeler featuring the communion design. Adams stitched the Ten Commandments piece.

“I kept the commandments by my bed the whole time,” she says “to remind myself to sew every day.”

The ladies thrived on each other’s support and teamwork.

“Carole taught me that this was about more than the kneelers. It was the connection of the two churches,” Crawford explains.

“This was not a mission, not a picnic,” Adams adds. “This was just us sharing our lives, women joining together.”

Their dedication ceremony fell on September eleventh in 2011, the ten year anniversary of the fall of the World Trade Center.

“It wasn’t intentional,” says Adams, “but we were told that it gave people a positive outlook on that day.”

Crawford remains thankful for their sister church’s help. “We could not have done this without Glenn Memorial who prayed for us, worked with us, and aided us financially throughout the project.”

After their recent success, it was suggested to Glenn Memorial in 2012 that they start another needlepoint project displaying the Stations of the Cross.
The group decided to make their Stations more unique by adding an additional panel that portrays Jesus’ resurrection as he tells Mary to run and share the news. 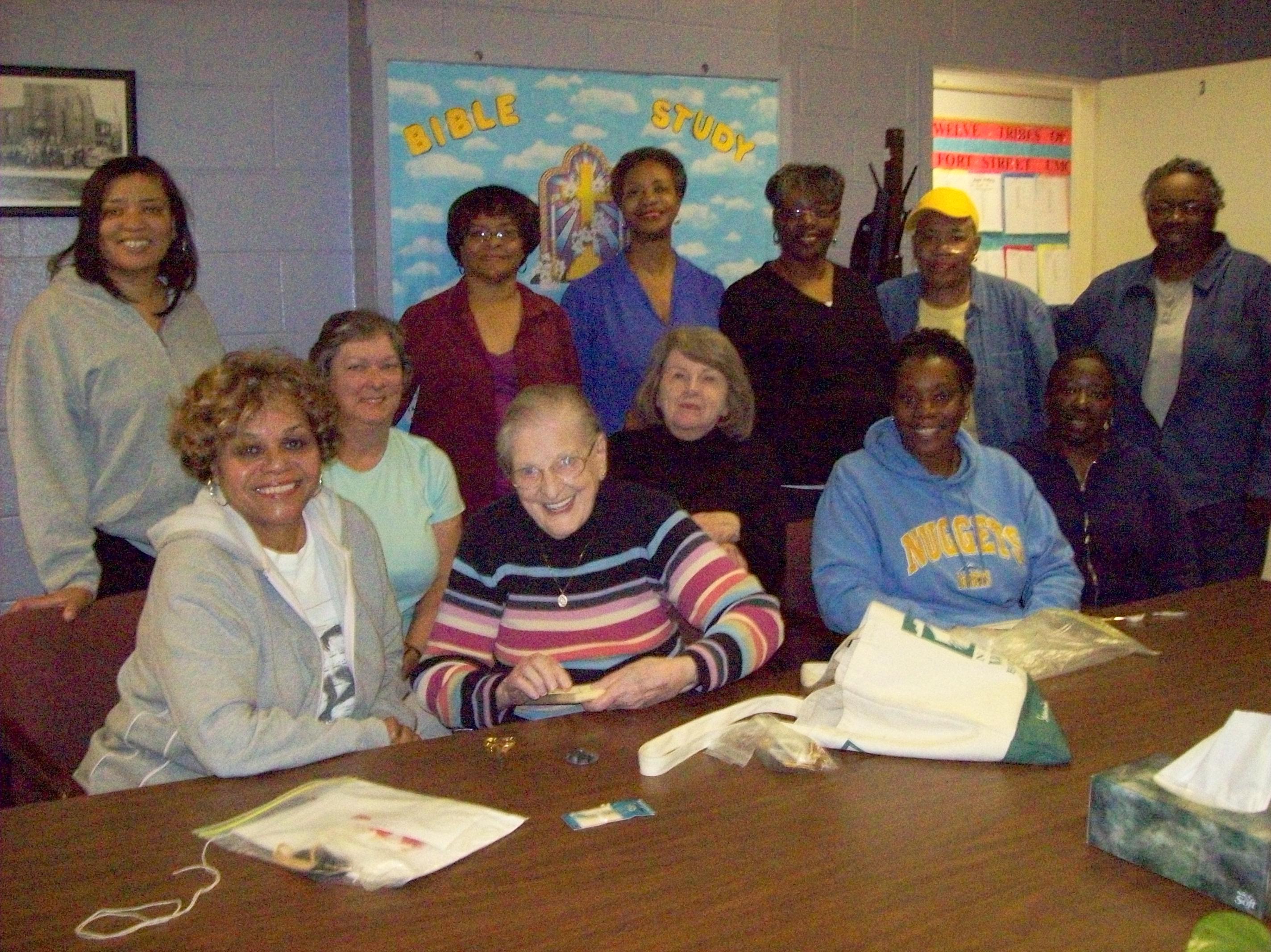 Again, the women, led by Adams, were both excited and anxious for another challenge. In preparation Glenn Memorial gathered up volunteers and attended a needlepoint class at Roswell’s “Nimble Needle”.

Stress built heavily during the construction of the Stations of the Cross as the women met new challenges of incorporating a variation of textures and patterns, sewing faces, and perfecting the image of Jesus. Tension increased as the project rolled on. At first Adams was unsure of the cause of frustration, but she later realized it had nothing to do with the sewing itself.

“We were feeling His passion,” Adams explains. “There wasn’t a place on the canvas without Jesus’ agony.” 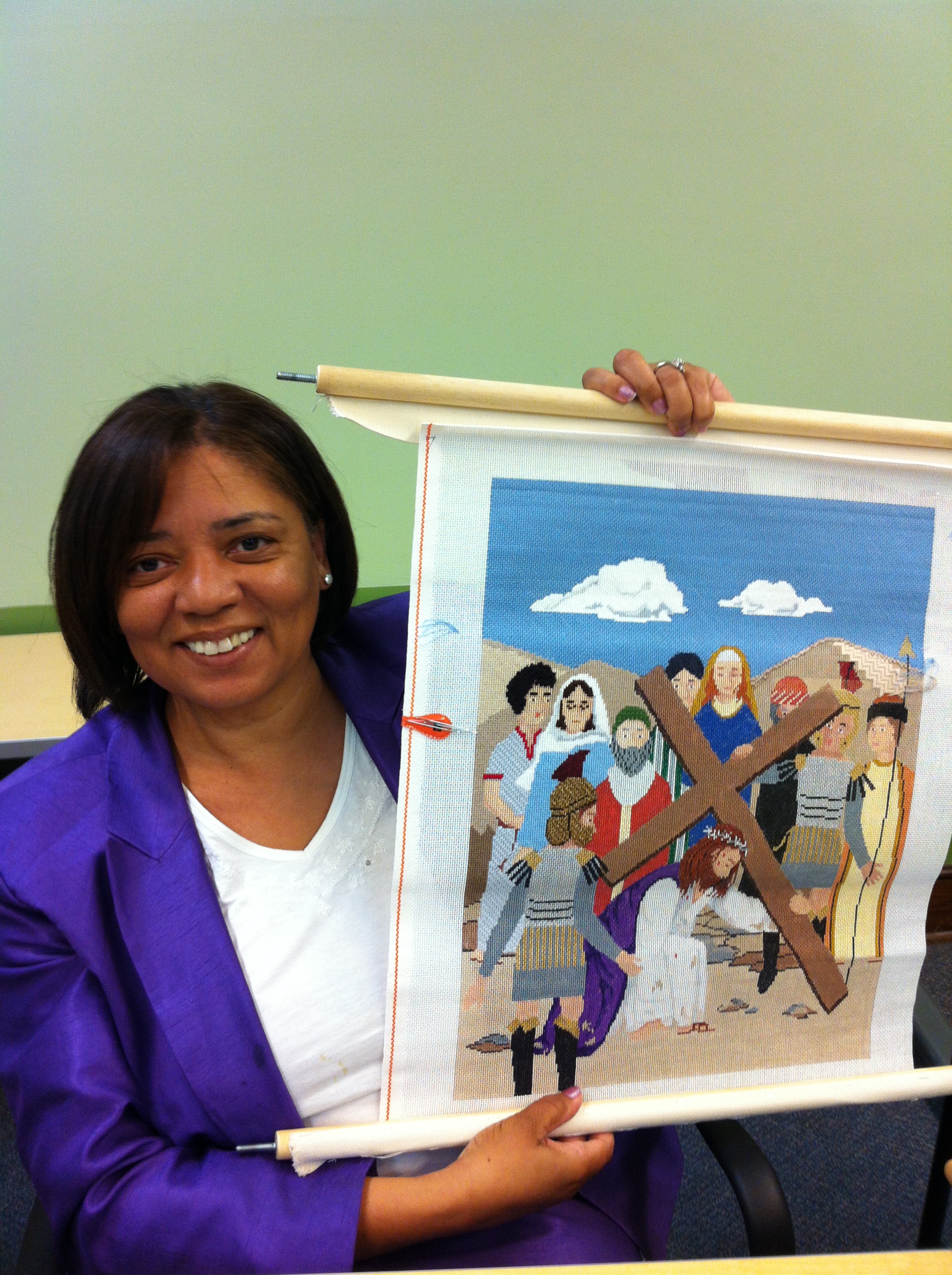 Sewing the panels provided each woman with unique opportunities to evangelize as family, friends, and strangers expressed curiosity in their needlepoint. One sewer even shared the story while stitching on an airplane. She fully credits the project for opening a conversation that otherwise never would have happened.

The women have finished the Stations in time to be revealed and dedicated on Palm Sunday during Glenn Memorial’s upcoming 5:05 service. Women from both projects will be in attendance along with Dr. Rev. Crawford.

The panels will be dedicated in honor of God and serve as a memorial for Glenn Memorial’s former Minister of Evangelism, Nancy Collins Eastridge who left a career as a leading attorney in Tennessee to follow God’s call to ministry. They are dedicating the panels to her in honor of continuing her ministry and in hopes that viewers may “consider more fully the drama, struggle, pain, divine love, sacrifice, and triumph of our Lord”.

Their needlework is less about the sewing of fabrics and more about the tight stitching of two church families in sisterhood. The panels will be shared between Glenn Memorial UMC and Fort Street UMC in continuation of the close bond between the congregations.


View photos of both projects HERE