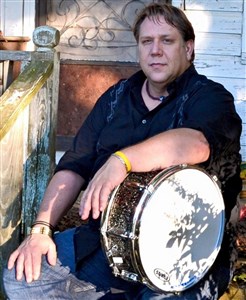 We want to introduce the musicians that will be assisting with the 2015 North Georgia Annual Conference of the United Methodist Church.

George Sandler started playing drums at age 4 and performed his first professional gig at 13. He has worked all over the world with countless musicians and organizations, including Sunday Drive, Derek St. Holmes, Tom Grose & The Varsity, Lou’s Blues Revue, The Wilson Braswell Band, Amy Taylor and The Deliverymen.

George studied music performance & education at Georgia State University in Atlanta and was a member of Spirit of Atlanta drum & bugle corps. He is a first call studio musician known for his diversity and has recorded with artists such as Mylon Lefevre, The Nelons, Taranda Greene, Gannon Adams, Carrie Bowen, Jordan Rager & Seth Condray.

George is also in demand as a clinician and instructor specializing in working with young drummers, marching and concert percussion ensembles and rhythm sections. He was the house drummer and percussionist for the United Methodist General Conference in 2012 and is proud to serve as the house drummer for the 2015 North Georgia Annual Conference. He served as a performer and clinician at the Fellowship of United Methodists 2013 Music and Worship Arts Week in Lake Junaleska and was the 2014 artist in residence as well as being a featured clinician in 2015. George was also part of the music team that served at the Georgia Pastors’ School at St. Simons last year.

He is also a member of the Rick Gage GoTell Ministries worship team that travels all over the country. George is a highly sought after programmer and consultant for churches, schools and performance groups throughout the United States. Along with his passion for performing, George is a devoted father of three and grandfather to Bentley.

Welcome to the team George!