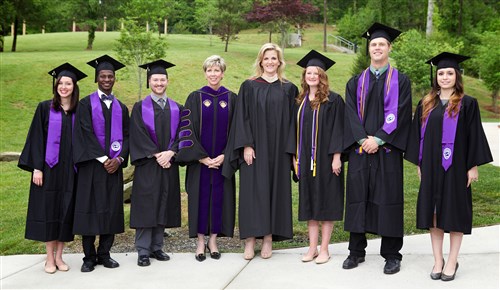 YHC alumna and Grammy and Emmy Award-winning singer, author, and actress Trisha Yearwood, ’84, delivered the Commencement address to the graduates, sharing with them the importance of following their dreams and finding happiness in their lives.

“The one thing I would say is to be happy. If you find something you love to do, you’ll be happy. Whatever that is inside of you, don’t be afraid. Don’t settle,” said Yearwood. “When you’re very young, you have the opportunity to go out and try anything. Do it now. That thing you want to do, go do it. If you’re happy in your life, you’re going to attract happiness into your life.”

YHC President Cathy Cox presented Yearwood with an honorary doctor of music degree. One of the highest-selling female artists in country music history, Yearwood broke onto the Nashville music scene in 1991. She has recorded 12 albums and has had nine No. 1 songs and 20 top 10 hits. She has won three Grammy Awards, three Country Music Association Awards, two Academy of Country Music Awards, an American Music Award and a Pollstar Industry Award for touring.

Yearwood has also released three successful cookbooks, which earned her the status of two-time New York Timesbestselling author. She currently hosts “Trisha’s Southern Kitchen,” a culinary series on Food Network that earned her an Emmy Award for “Outstanding Culinary Program.”

While at YHC, Yearwood participated in musical ensembles, chorus, plays and operettas. She and her sister, fellow YHC alumna Beth Yearwood Bernard, ’81, of Tifton, Ga., who attended the ceremony, were both members of the Dorcas Society and each served as president of the Sigma Beta Sigma sorority.

“I made the best friends of my life at YHC. We have stayed connected to Young Harris; we haven’t always been on the campus, but we have gotten together almost once a year since we graduated,” Yearwood said. “There’s a bond, and it’s really hard to describe. People ask, ‘What is so special about Young Harris?’ It’s the people who are here.”

The Young Harris College Medallion, the highest honor bestowed by YHC to alumni and friends who have made extraordinary contributions, was awarded to Richard and Shirley McGinnis of Johns Creek, Ga. Richard joined YHC’s Board of Trustees in 2004, and the couple has enhanced campus programming and student experiences for more than a decade by supporting the College in many ways. They recently expressed their enthusiasm for the fine arts with a $4 million gift that is serving as seed money for the development and design of a new performing arts center.

YHC is among an elite group of Southeastern colleges and universities who annually bestow the prestigious Algernon Sydney Sullivan Foundation Awards on outstanding male and female graduating seniors. President Cox presented this year’s Algernon Sydney Sullivan Award to David Atwood of Waynesville, N.C., and the Mary Mildred Sullivan Award to Alyssa Lowery of Conyers, Ga. Created nearly a century ago to honor the service leadership of their namesakes, the awards are given annually by the Foundation to individuals whose nobility of character and dedication to service sets them apart as examples for others.

The Dr. Charles R. Clegg Outstanding Scholar Award, which was named in memory of a beloved past president of the College and recognizes graduating seniors with the overall highest grade point average, was presented to Sara Beaster of Murphy, N.C., Tiffany Goebel of Murphy N.C., Mark “Aaron” O’Tuel of Hartwell, Ga., Sarah Puett of Warne, N.C., Jacqueline Tallman of Hayesville, N.C., and Jeffrey Stewart of Young Harris, Ga.
Ashley Cross of Murphy, N.C., and Emily Espy of Cumming, Ga., were presented the Zell B. Miller Leadership Award for significant contributions to campus life at YHC as outstanding leaders and role models. The award’s name honors former U.S. Senator and Georgia Governor Zell B. Miller, ’51, a YHC trustee and distinguished alumnus. Miller was in attendance at the ceremony to personally congratulate the recipients along with his wife and YHC alumna, Shirley, ’54.

Brian Walker, of Powder Springs, Ga., and Carol Raterman of Lawrenceville, Ga., received the Young Harris Spirit Award, which recognizes the students who best demonstrate outstanding levels of personal integrity, friendliness and engagement with the campus community.
Many members of the senior class will go on to begin graduate programs and careers
News