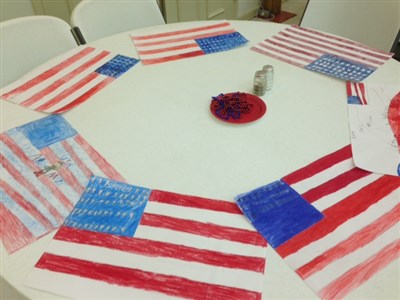 A National Guard Unit from the Toccoa Armory that will be deployed to Afghanistan in July were treated to a breakfast feast prepared by members of Toccoa First UMC on Wednesday, May 29.

The 876th Engineer Company of the National Guard Unit based in Toccoa will leave May 29 to receive further training for their specific work in Afghanistan over the next nine months. The 150 service men and women attending the breakfast received goodie bags with snacks and a devotion booklet along with a $100 Walmart gift card made possible by a $15,000 anonymous donor. The First Grade Class of Toccoa Elementary School used their artistic skills to draw pictures and inscribe well wishes on the table place mats which brought smiles and many comments from the troops.
News