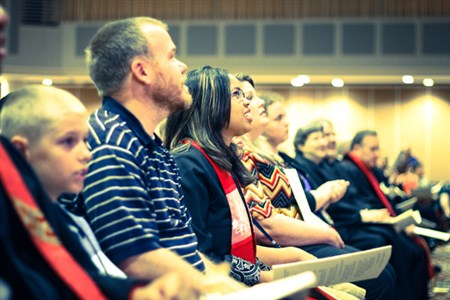 The following report was submitted to United Methodist News Service and is published with other Annual Conference Reports at umc.org.

Bishop Mike Watson called to order the 148th North Georgia Annual Conference session at The Classic Center in Athens, Ga., marking his sixth year of service to the North Georgia Episcopal Area. In the three-day session, North Georgia United Methodists focused on the theme “Together We Make Disciples,” emphasizing ministry to children and young people from birth to 25 years old.

The conference included a large number of youth and children in a wide variety of roles throughout the event, praying, presenting, performing, taking part in worship and serving communion. North Georgia also welcomed children’s workers, youth workers and those who work in camping and campus ministries as visitors. Five Wednesday-evening workshops featured diverse panels on the topics of children’s ministry, youth ministry, young adult ministry, camping ministry and campus ministry.

Bishop Jonathan Holston of the South Carolina Annual Conference was guest preacher for opening worship and the service of service of licensing, commissioning and ordination.  He served as pastor and district superintendent in North Georgia before being elected bishop in the Southeastern Jurisdiction in 2012. He received a warm welcome home to the North Georgia Conference and his hometown of Athens. “God has called us to something grander than we could ever, ever dream of,” he said to the conference members. “What are you going to do with your one and only life?”

United Methodist Women organized an UMCOR kit collection as their annual conference mission project. By the end of the session, 827 birthing kits, 265 layette kits, 1,816 school bags, and 837 health kits had been donated – a value of $45,911. A Red Cross Blood Drive on site collected 96 pints of blood. A special offering for the United Methodist Global AIDS Fund raised $27,000 and more than $83,000 was given to ELI, a program of the North Georgia’s Camp and Retreat Ministries. During the Imagine No Malaria report on Thursday afternoon, a spontaneous offering brought more than $7,300. On the closing day of Annual Conference, North Georgia officially launched a year-long Imagine No Malaria campaign.

Handheld technology was the unofficial order of the day on Thursday, when members practiced using electronic voting devices in preparation for next year’s election of General and Jurisdictional Conference delegates. In separate reports, members were invited to use their smart phones to subscribe for information and another offered the opportunity to make a donation by text.

Conference members voted to close operations of the Simpsonwood Conference and Retreat Center, a ministry of the conference that was opened in the 1980s, due to ongoing financial losses. The North Georgia Conference offices will remain open on the property.

A resolution was passed calling on the Conference Board of Connectional Ministries to appoint a task force to research and report potential ways the North Georgia Conference may engage with people in the Holy Land in constructive conversations about peace efforts in that region, and to present recommendations on a potential mission bridge to Jerusalem.

Twenty-six retirees were honored at the retirement service.

At the Service of Remembrance, Rev. Dr. Ed Tomlinson preached a sermon titled “In Pursuit of Perfection.” The conference memorialized 40 clergy, clergy spouses and lay leaders.

The conference established a budget of $23,752,041 for 2015. This budget is $242,708 lower than the 2014 budget, making this the 6th consecutive year that the budget has decreased.   The conference celebrated five years of consecutive increases in the percentage of apportionments paid with 93.3 percent paid in 2013, a long-time high.

The next session of the North Georgia Annual Conference will be held June 16-19, 2015 at The Classic Center in Athens.

Find this report at http://www.umc.org/who-we-are/2014-north-georgia-annual-conference.