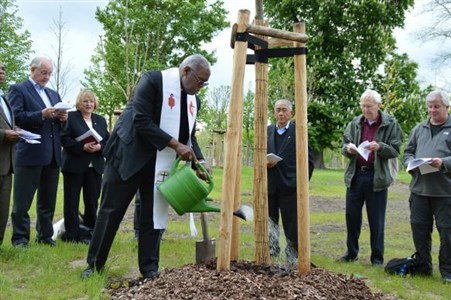 San Francisco Area Bishop Warner Brown Jr., president of the Council of Bishops, waters a newly planted tree in the Luther Garden in Wittenberg, Germany. The Lutheran World Federation is inviting churches around the globe to plant a tree in the garden and another in their area as part of preparations for the 500th anniversary of the Protestant Reformation in October 2017.

They each had their faith shaken in a powerful storm. During a dark night of the soul, they both found assurance of God’s grace in a reading of Paul’s Epistle to the Romans.

Those are just two similarities in the life stories of John Wesley, Methodism’s founder, and Martin Luther, arguably the seminal figure of the Protestant Reformation.

Without Luther, it’s quite possible no Wesleyan movement would have arisen two centuries later.

In fact, hearing Luther’s preface to Romans helped spur Wesley’s spiritual awakening on the night of May 24, 1738.

A group of 17 United Methodists, including North Georgia's Bishop Mike Watson, visited Luther’s home of Wittenberg, Germany to further explore the connections between Luther and Wesley and celebrate the ecumenical ties among today’s Lutherans and Wesleyans.

In addition to Bishop Watson, the United Methodist group included five bishops from Germany, Zimbabwe, the Philippines, and the United States, as well as four staff members from the bishops’ Office of Christian Unity and Interreligious Religious Relationships, the denomination’s ecumenical arm.

Bishop Watson said he was delighted to visit landmarks in Luther’s life and participate in the Luther Garden tree planting. He will be the next Council of Bishops ecumenical officer, starting in September 2016.

“I’m glad to be a part of it because it shows the history of the Protestant church,” he said, “and it also shows that churches of all denominations come together to rejoice and celebrate that history.”