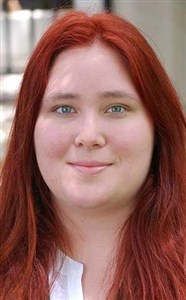 Savannah is native american, Echota Cherokee tribe, and a member of the North Alabama Conference. She is studying neuroscience and behavioral biology at Emory where she is also a student leader at the Emory Wesley Foundation.

Her placement this summer is with Results and Results Educational Fund, sister organizations that work to end poverty by creating long-term solutions to address its root causes: lack of access to medical care, education or opportunity to move up the economic ladder.

Young adults are selected annually to participate in the EYA internships. Applicants are drawn primarily from the five ethnic caucuses of The United Methodist Church (UMC), and increasingly from Central Conferences (outside the United States) to reflect the global nature of the denomination.

The ethnic makeup of the 2015 interns underscores the diversity of the denomination. Three persons identify themselves as African American, but one identifies himself as African American and Native American. Another intern identifies herself as white, but also Native American. One intern is from Africa, another from the Philippines, and there is a Filipino-American. Two interns are Korean-Americans.

The interns come from 10 United Methodist annual (regional) conferences. Three of the denomination’s five U.S. jurisdictions are represented: North Central, Northeastern and Southeastern. Two are from countries halfway around the world from each other: Ghana in Africa and the Philippines.

To qualify, applicants must be passionate about social justice and active in the denomination, according to the Rev. Neal Christie, GBCS assistant general secretary for Education & Leadership Formation who directs the program.

Christie, an EYA intern himself in 1984, said the internship is The United Methodist Church’s only leadership development program with a public-policy and advocacy focus that reaches out to under-represented racial and ethnic young adults of color.

After visa problems prevented Central Conference participation last summer, Christie was pleased to be able to include two young adults from overseas this year.

Christie said he just learned that a former EYA intern was elected a delegate to General Conference, the denomination’s highest policy-setting body. He said this underscores the leadership development aspect of the EYA program.

A Duke Divinity School summer intern at GBCS, Minoka Gunesekera, was an EYA intern herself several years ago. As part of her internship this year, she is serving as a de facto chaplain to the EYA interns, leading weekly devotions and advising them.

“This is an example of the payoff this kind of program has,” Christie emphasized. “They want to give back to a program that shaped them.”

For the first time, the interns are housed in the United Methodist Building, where apartments were recently renovated to support GBCS programs, such as internships. The interns attend worship together each Sunday at a different area church. They also meet for weekly evening devotions and Bible studies. Gunesekera leads the Wednesday worship.

The interns will travel to Baltimore June 19 where they will have an opportunity to learn about some Methodist heritage, and meet with a United Methodist pastor who will discuss faith community’s role in Baltimore in recent weeks to promote reconciliation and justice following the civil unrest after the police killing of Freddie Gray.

“Funding for the EYA summer internship is, of course, very limited,” said Christie. “Costs for housing continue to rise. With increased funding, we could open the EYA internship to many more students from Africa, the Philippines and Europe, assuming the visa situation could be overcome, and which was still a factor this year thrwarting some applications.”

More information about the EYA program can be obtained from Christie at (202) 488-5611 or nchristie@umc-gbcs.org. Application details are available at EYA Internship Program (http://umc-gbcs.org/eya-internship).