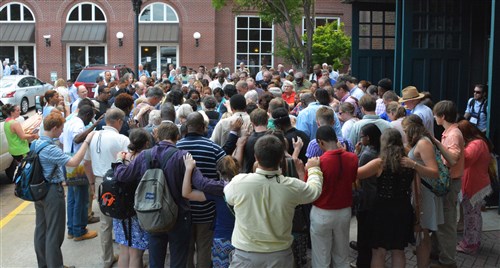 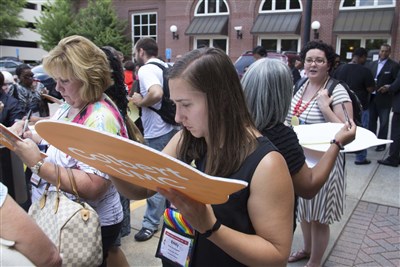 A pulse shifted across the room as Bishop Mike Watson delivered a tender and influential message, sharing the news of the tragic shooting in South Carolina at Mother Emanuel A.M.E. A heaviness was felt across the entire room, but there also began a strengthening in the United Methodist and Pan Methodist connection.

Difficult decisions and voting duties continued in preparation for 2016’s General Conference, but discussions were covered by thick blankets of grace and love.

Sides supported each other without degrading, as Bishop Watson suggested. In a room filled with people, wired by their Creator to serve, there was a buzz of unrest and a swell of a thousand hearts aching to respond. A lay person’s request to immediately travel to the hurting brothers and sisters was answered with a valiant “YES!” Empty buckets were carried from backstage in response to a spontaneous request to collect an offering. When the buckets were returned, they were filled with cash, around $6,500.

Props originally created to display the names of churches who support the Action Ministries were flipped over to write words of prayer and support to one church in need. They were seen across social media as they made their way to South Carolina.

There is beauty in the urgency that the clergy and laity felt that week to be with the mourning Pan-Methodist family, both actively and prayerfully. The North Georgia Conference craved more than sending words, it sought to send people and spirit, to be present.

There is also beauty in the care and time taken to raise money and awareness for Imagine No Malaria. People knew the organization would be the Annual Conference focus months in advance, encouraging congregations to embrace their creativity and work towards the denomination’s $75 Million goal.

Dodgeball tournaments, benefit concerts, special offerings and so much more have brought the conference’s donation total to $678,320.45 so far in 2015. 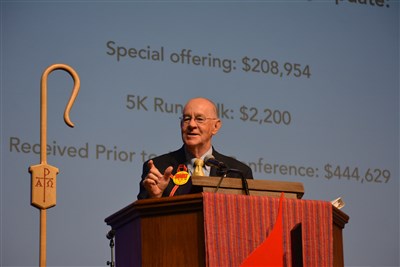 Jamie Jenkins successfully expressed the passion he has for the organization through presentations and videos throughout the sessions. The Conference responded to his words with compassion and provision, resulting in a total of $231,491.45 donated at Annual Conference alone.

The money donated to Imagine No Malaria goes to fund parts of the organization that most people of the conference can’t physically manage. Clergy and laity may not be able to personally assemble bed nets or diagnose patients with the correct medicine, but through monetary involvement have provided Africa with people who can. It’s a different feeling of connection, knowing that your dollar, and his dollar, and her dollar combined keeps children safe.

Serving in the name of The United Methodist Church means that no country is out of reach, and no congregation is too small. 2015 Annual Conference represented what a real connectional denomination looks like. It’s a confetti of people, talents, and ideas, all going at different speeds and pathways – all of equal importance.