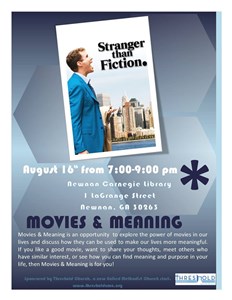 Rev. Dr. Quincy Brown, resident of Newnan and long-time pastoral leader in the North Georgia Conference, will start a new church in Newnan. Planted to meet the needs of the area’s diverse and growing population, Threshold Church is expected to open one year from now, in August of 2015.

In June, Brown completed a 17-year stint at LaGrange College as chaplain and Vice President for Spiritual Life and Church Relations, during which time he also served on the staff at LaGrange First UMC. Feeling a strong calling to start something new, led him to begin this journey.

“I felt it was time to re-invent myself. And then I got the calling to do this. I distinctly remember the moment as one when you sense you are standing on the threshold of something new – of a new way of living.”

Brown has been living in Newnan, which is in the second fastest growing county south of Atlanta, for two years. He and others in the Conference agreed that Newnan would be an excellent community to launch the new church. New healthcare facilities have brought people in from all over the country.

“Other churches are starting here and seeing growth,” he said. “Threshold Church is committed to reaching people that have been disconnected with church and not yet connected with God.”

Brown is currently serving on the staff of Impact UMC in East Point, one of the North Georgia Conference’s most dynamic and fast-growing congregation. Rev. Olu Brown will serve as a guide to Quincy while the latter simultaneously plants Threshold Church.

“After nearly two decades of working with college students, Quincy is uniquely poised to reach a young and diverse group of people through his creative approach to ministry,” said Dr. Phil Schroeder, NGUMC's Director of Congregational Development. “This is one of several new collaborative ministries that are being created across the North Georgia Conference to try doing church differently."

When asked about the style of the new church, Brown said it will be blended in terms of traditional and contemporary.

“Threshold is that place between rooms. This will be the best of both worlds,” he said.

In the coming weeks, Brown will identify a team of 20 to 30 people to secure a location and begin to build out the staff and leadership this needs to say launch team instead of staff and leadership of Threshold Church.  The first meeting for people interested in helping start the church was held Aug. 2. Dubbed, “Movies & Meaning,” attendees watched The Dark Knight Rises and discussed the question: What happens when we ignore our dreams in order to follow something of more status?

The next Movies and Meaning gathering is coming up August 16 from 7 to 9 pm at Newnan Carnegie Library. Attendees will watch Stranger Than Fiction.

“I have watched Quincy grow in his leadership, gifts and talents, and am so thrilled he is willing to take this leap of faith to plant a new church,” said Rev. Carol Cook, NGUMC’s Superintendent for the LaGrange District, which includes Newnan. “We have no doubt that Quincy will recruit innovators, early adopters and those that haven’t found what they are looking for in a church.”

With occasional preview services starting in January, the church plans to have weekly services by next summer and a formal opening in August 2015. More information can be found at www.thresholdumc.org.

About Rev. Dr. Quincy Brown
A native of Gainesville, Ga., Quincy graduated from DeVry Institute of Technology with a BS degree, the Candler School of Theology at Emory University with a M.Div., and Interdenominational Theological Center in Atlanta with a D.Min. As a published author, having written numerous articles and two books: Q.U.E.S.T.: Stories as Guides Through Life’ s Transitions, and The Q.U.E.S.T. for Vocation: A Personal Journey to Discern a Life’s Calling, Quincy is interested in creating threshold communities for people on the cusp of something new to encounter God. He is married to Dionne Moore Brown.