Bishop Watson Among Speakers at Malaria Event in Atlanta Bishop Mike Watson spoke on behalf of The United Methodist Church at a malaria focused global health event on Thursday, August 20, at the Center for Civic Intervention in downtown Atlanta.

The event was sponsored by Nothing But Nets and the United Nations Foundation and included speakers/representatives from the CDC (Dr. Jerry McElroy), NBA/Atlanta Hawks (Rutherford Seydel and Dikembe Mutombo), U.S. Congressman Doug Collins (District 9),  Nothing But Nets (Chris Helfrichr), and Bishop Watson. 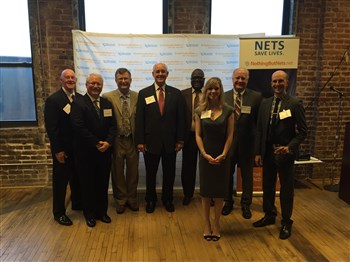 Bishop Watson shared with the group about The United Methodist Church’s commitment to the global fight against malaria and why the support and actions of the greater Atlanta community is an important component of this global effort.

To date North Georgia United Methodists have raised  more than $725,000 and the denomination has raised more than $68 million in cash and pledges in support of Imagine No Malaria.

Since 2000, deaths from malaria in Africa among children under age 5 has been reduced by 69%. 6.2 million lives have been saved.