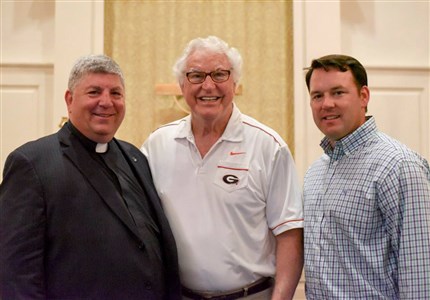 Holmes had a brief football career with the Dallas Cowboys after graduating UGA, then moved to Monticello where has involved himself in politics and runs a dairy farms. In 2006, he was a Distinguished Alumni Award Recipient.

When asked to attend Monticello UMC for the special service, he happily obliged and suggested another UGA graduate to speak, Senator Burt Jones. Both are a part of the UGA Letterman Club. 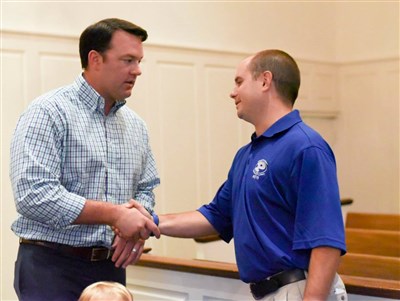 Jones had dreams of being a Bulldog since he was a young boy, but his acceptance letter did not come with the football scholarship he had hoped for. The setback increased his determination, and he worked his way to become a walk-on. The senator attributes his faith to the strength he maintained throughout his college football experience.

“Yes, he is a politician,” said Monticello First UMC's pastor Rev. Nathaniel Long, “but he wasn’t there as a politician, he’s here as a man of faith.”

About 160 people were in attendance to hear the special guests share their spiritual journeys. The church also gave out Common English Bibles to anyone who wanted them.

Long cherished the opportunity to host students from every local school.

“It brings the community together as on group of believers,” he said.

The event was originally started by church member Larry Pierson, whose daughter photographed the occasion, around 2008.

Monticello isn't the only church reaching out to young athletes. Ringgold UMC has also welcomed the start of a new school year and athletic season by hosting a tailgate party at a local football game in Catoosa County.

The church set up some food and fun on the Band Practice Field before the Heritage vs. Ringgold game on Friday, August 28.

Share with us in the comments about what your congregation is doing to kick off the new school year.