Middle School Student Gives Big to Imagine No Malaria, You Can Too! 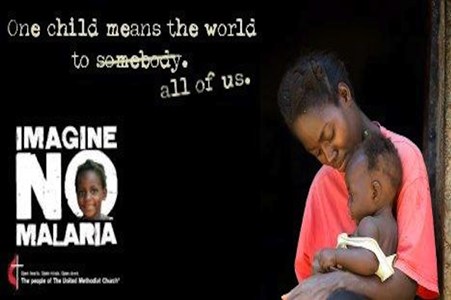 A group of middle school students at the Mossy Creek Campmeeting were told about Imagine No Malaria recently. They were asked to think about how they could contribute to this life saving ministry and when they got back home to see how their youth group could help.

Britton heard the story, took it to heart and did something about it. He did not wait until he returned home. That night he handed over $50 for Imagine No Malaria and the next night he brought $50 more. Way to go, Britton.

I suspect that when Britton gets back to his home church, Trinity United Methodist Church, Clermont, he will do more and others will join him in raising awareness and funds that will save the lives of many children, mothers, and others in Africa.

Imagine No Malaria provides an exceptional opportunity to save lives. Partnering with United Methodists and others across the country and around the globe, our goal is to eliminate death and suffering from malaria. The generosity of the Bill and Melinda Gates Foundation has provided all funding for the administrative costs of this initiative. With no overhead, every dollar given goes directly to provide the needed resources.

It is hard to realize that a child dies every 60 seconds from a disease that was eradicated in the United States sixty years ago. The good news is that since Imagine No Malaria launched its effort in 2010 the death rate has been reduced by 50%. But any child dying from malaria is not acceptable because we have the means to create a world with NO malaria.

The goal of Imagine No Malaria is to end death and suffering from malaria. Through the four pronged efforts of prevention, treatment, education, and communication the goal is achievable.

Imagine No Malaria has distributed over 2.3 million insecticide treated bed nets in the 16 African countries where we are operating. This and other preventive measures such as clearing standing water and removing brush around dwellings can greatly reduce the risk. If persons are infected with malaria, early diagnostic kits along with affordable and accessible medication and other medical care is provided though more than 300 United Methodist operated health clinics to treat the disease.

Over 11,600 volunteer community health workers have been trained and are working with their neighbors to distribute and properly install bed nets. They also educate the people on other preventive measures, the symptoms of malaria, and where and how to treat the symptoms. These volunteers are dedicated to the task as a part of their obedience to Jesus' instructions to care for their fellow human beings. They are people who are known and trusted by others in the community. Communication through cell phones and radio gets helpful and important messages to people in remote areas.

The United Methodist General Conference established a goal of $75 million dollars in order to achieve the ultimate goal of ending death and suffering from malaria by the end of 2015. Over $62 million has been raised. The North Georgia Conference joins 45 other Annual Conferences who are already engaged in this effort. The goal is in sight. Throughout this year individuals, groups, and local congregations will join in the effort to save lives. What will you and your church do to help us cross the finish line?

Jamie Jenkins is the North Georgia Conference Field Coordinator for Imagine No Malaria. Find more information at www.ngumc.org/imaginenomalaria or www.ImagineNoMalaria.org.