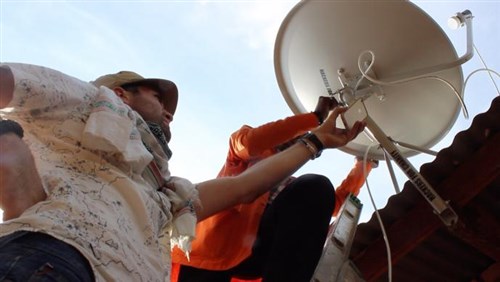 Thane Richard (left) is publisher and chief operating officer of Outernet. Outernet uses capacity on a global satellite network to beam data from the open Internet to users with a receiver, similar to the way radio works. (UMNS Photo)

NASHVILLE, Tenn. (UMNS) -- Did Jesus want us to feed the hungry, heal the sick and shelter the poor, or give them the tools to provide for themselves?

The Rev. Neelley Hicks said both are needed.

Hicks, a United Methodist deacon, says people ask her why the church should be involved in these kinds of groundbreaking technologies when so many are in desperate need for the essentials such as food, water and shelter.

“This is limited thinking that will keep us set on a model of charity rather than empowering people to live equally as God’s beloved creation. Modern technologies can expand our ability to think new thoughts and dream new dreams,” she said.

The summit is the communication agency’s fourth international learning event this year, she said. Others were held in the Philippines, Côte d’Ivoire and Democratic Republic of the Congo.

Also attending this year’s summit are seven church workers from Africa and the Philippines who are workshop leaders and panelists. They testified about how these technologies have saved and transformed lives in their countries.

Dan Krause, the top executive of United Methodist Communications, welcomed participants to the summit by saying more than 5.8 billion people in the world don’t have access to the Internet.

“How do we use technology to transform people and situations for higher quality of life? The answer to that question is why we are here.”

“Here in the U.S., amber alerts, campus communication systems, weather alerts, up-to-date electronic curriculum and public health notices keep us as safe and educated about the things that matter most. But in other parts of the world, this flow of information is lacking, creating poverty of a unique sort — information poverty,” Hicks said.

The first keynote speaker was Ken Banks, founder of kiwanja.net and developer of Frontline SMS, a free text-messaging communication system.

He said one of the keys to this kind of technology is to nurture, not take over. “In the rush to produce useful things, we often forget the empathy,” Banks said.

Banks told a story about a man in an African village with no electricity who would carry a car battery to a neighboring village, charge it up, and bring it back to his village so people could pay him to charge their phones. He said that entrepreneur with a car battery is an example of how people make up their own solutions out of a simple drive to improve their lives.

Banks said Frontline SMS was successful because it is “the most basic, dumbest technology. We often shirk at the simple stuff in favor of modern, sexy stuff. It is the simple stuff that has most profound impact.”

He cited the 2007 Nigerian presidential election as one of the first times he saw the power of SMS technology. It was the first time Nigerians were able to freely monitor their national elections by receiving results via text.

ICT4D was lifesaving when the Ebola crisis hit the countries of Guinea, Sierra Leone and Liberia.

“The government was manipulating the facts while Ebola was killing people,” he said.

“Bishop John Yambasu and other religious and faith leaders joined hands to get critical information out to the people. It worked because the religious leaders are more trusted than politicians,” he said.

“Simple mobile phones carried daily messages from the CDC (Centers for Disease Control) and WHO (World Health Organization), letting clergy know that Ebola is real and that they needed to adjust behaviors in church by not touching one another, but instead bowing as a sign of respect,” Hicks said.

‘As we struggle with Ebola, I pray that faith — not fear — will be our response. This is not the time for blame or denial. It is a time to respond in love. Bishop John Innis’”

David Robinson of World Vision said the messages went to their staff. “To this day, these messages still arrive in the cell phones of our staff,” he said. Staff members have said those messages gave them encouragement and gave them a lifeline.

Hicks closed her opening remarks by saying, “I pray that this Summit will inspire us all with new thoughts and the ability to live into the beloved community,” and shared a Franciscan blessing:

“May God bless you with anger
At injustice, oppression,
And exploitation of people,
So that you may work for
Justice, freedom and peace.

…And may God bless you
With enough foolishness
To believe that you can
Make a difference in the world,
So that you can do
What others claim cannot be done.”