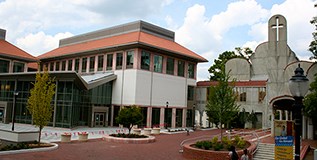 Emory University's Candler School of Theology, founded in July 1914, celebrates its centennial beginning Aug. 28 with an opening convocation in Cannon Chapel, the publishing of a new book on its history, the dedication of a new building for Pitts Theology Library, and a series of events throughout the academic year, culminating with a centennial academic conference in the spring.

“Since Candler’s founding, our faculty and student body have strived to witness to the transforming power of Christian expressions of love, grace, justice and mercy at work in the world,” says Candler Dean Jan Love. “The gospel of Jesus Christ demands this of us. I’m convinced we’ve been more effective because our school is part of a university where religion and reason have joined together to face the challenges of the past 100 years.”

“Candler represents that hard middle place in the world today in which a commitment to the faith and the highest intellectual standards go together,” Johnson says. “In most places, the academy is the place where you can study but you can't have faith. And the church is the place where you can have faith but you better not be inquiring. Part of our challenge is to try to pull those two dimensions together and to show that they are not opposites, that they can be held in a healthy tension.”

Candler has graduated more than 10,000 students since its first degrees were conferred in the spring of 1915. Approximately 70 percent serve as ministers in congregations, but significant numbers have pursued vocations in education, law, business, social justice and the arts.

One of 13 official seminaries of The United Methodist Church, Candler is ecumenical and diverse. Its student body of about 450 represents some 40 Christian denominations and 16 countries.

“About 50 percent of our students are United Methodist. But we have lots of Episcopalians, Baptists and others who are not attached to any denomination,” says Love. “So it’s possible to come to Candler to encounter and learn from a healthy representation of the whole world of the Christian faithful and figure out what you want to do with your life and ministry within that context.” Candler’s approach to theological education has been shaped by the evolving social context and shifting intellectual currents of the 20th century and the visionary leaders who led through these challenging times. Gary S. Hauk, vice president and deputy to the president of Emory, explores this evolution and other interesting facts about the school in his new book, "Religion and Reason Joined: Candler at 100" (Bookhouse Group, Inc., 2014).

According to Hauk, Candler was founded as a conserving step, when Warren Akin Candler pushed to have a school for training ministers moved from Vanderbilt University in Nashville to Atlanta.

But within five years, Dean Franklin N. Parker (1919-37) came out in support of academic freedom and the controversial “modernism” movement that was emerging in theological education. In addition, under his administration the faculty voted in 1922 to admit female students even though Methodism did not yet offer a path to ordination for women.

In 1957, during the deanship of William R. Cannon (1953-68), the Candler community began publicly voicing its support for racial integration. Alumni were among other leaders who published a “Ministers’ Manifesto” in local newspapers urging racial harmony; a year later, a letter from Emory supporting racial integration, and signed by nearly all Candler faculty, was published in local papers.

Cannon and his successor, James T. Laney (1969-1977), made several faculty appointments that shaped Candler’s academic excellence over the next half century and firmly secured its dual mission – preparing leaders for the church and for the academy. Laney appointed the first full-time African American faculty member, launched “supervised ministry,” the foundation for today’s nationally renowned Contextual Education program, and started the Anglican Studies program. He also negotiated the purchase of Hartford Theological Seminary’s library collection, which propelled Pitts Theology Library to national status.

Dean James L. Waits (1977-91) navigated economic and social constraints to build Cannon Chapel, which provided much needed worship space for Candler and also a place for interfaith worship for the Emory community. He continued the appointments of star-powered faculty, including the first two tenured female faculty members, and started the Black Church Studies Program.

Coinciding with Candler’s centennial is the opening of a long-anticipated new home for Pitts Theology Library, one of North America’s premier theology libraries.

The new Pitts is positioned between Cannon Chapel and Candler’s Rita Anne Rollins classroom facility, creating space and opportunity for research and collaborative learning. It includes areas for small-group study and seminar rooms for larger groups or classes, an 80-seat lecture hall and 1,000 square feet of adjacent exhibit space, as well as high-density shelving and a dedicated special collections area.

Since its beginnings as a small collection of books in a dark basement corner of Wesley Memorial Methodist Church, Pitts has grown exponentially in the number and quality of its holdings – more than 610,000 volumes to date -- forging an international reputation along the way. Jan Love, dean of Candler School of Theology and Professor of Christianity and World Politics

“The library building at last begins to match the quality of our collection. It’s long overdue, and for a generation, faculty had been wanting to reunite faculty offices, classrooms, and the library in one facility that’s in intimate relation to the chapel that serves us so well,” says Love.

As Candler reaches its 100th year, Love notes that although U.S. theological education is in flux, the school is well positioned within Emory. “As higher education -- and the world -- have become much more secular, Emory has continued to cherish the reality that religion remains a pervasive part of human community and that the study and practice of religion are integral to a holistic experience of higher education. Candler is privileged to form Christian leaders in this remarkable university where our students interact with Jews, Buddhists, Hindus, Muslims and others across campus every day. Emory provides a model laboratory of multi-faith encounter and understanding, a terrific place for training those with deep Christian convictions about building community with other faith traditions for the good of all people in the world.”