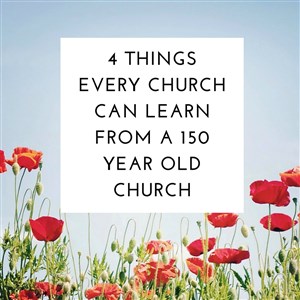 Churches that survive and thrive for 150 years or more are by no means formulaic in their approach to ministry, but they do share a common trait: staying power. What are the lessons to be learned from these long-standing congregations? Four NGUMC pastors weigh in on what has buoyed their churches through the test of time.

1. Church is a family, not a business

Rev. Emily Case serves Eliam UMC in Elberton, Georgia, a congregation approaching its 200th year. Case says one of the most powerful things about pastoring Eliam is the members’ unfailing faith -- faith in Jesus, faith in their church, faith in their families, and faith in the system of Methodism.

It’s this faith, she says, that’s at the root of their membership. It’s why they do church. Not because of a pastor’s popularity, or a provocative sermon series, or a thriving youth group. They go to church because it’s at the core of who they are. They’re members of a family, not just shareholders in an organization.

“They understand that life happens -- that churches grow sometimes, and decline sometimes,” says Case. “They don't worry when they get a preacher that isn't perfect, or when their neighbor says something that makes them mad. Because that church -- the building and the people -- is in their bones, in their DNA.”

“Churches have an ability to shape the leadership and direction not only in the church but the community,” Ross says. “But for that to happen the pastor has to want to be in the community and in the church,” says Ross. “They have to dig in. They can’t be looking for the next move or next appointment. They have to help the church create a vision for the church and community and be willing to see it through. It’s like the illustration of the freightliner changing direction in the ocean. It can’t change direction quickly or it will capsize. It takes time and work.”

Rev. Jody Ray is senior pastor at Stockbridge United Methodist Church in Stockbridge, Georgia. The 190-year old congregation has weathered a multitude of changes, especially in the last couple of decades. Starting in 2000, Stockbridge began to grow both in number and in diversity, swelling from 150 congregants in church each Sunday to nearly 450 in worship in present day.

Ray says in recent years the surrounding county has become much more diverse than it once was, which prompted a re-evaluation of what Stockbridge had to offer. “The church wanted to grow, and they wanted to reach this community,” says Ray. “[After the church experienced a fire] there was a choice to move into another community or to stay where they were, and they chose to stay where they were.”

Though it wasn’t always easy, Ray says, Stockbridge UMC made intentional staff changes, cut non-essential programs, and came through the process transformed. The congregation is now 50% white, 42% African American, and 8% Hispanic – one of the most diverse congregation in the North Georgia Conference.

“There had to be an openness to the change that was happening around us, but they held on very firmly to the main tenants of our faith and those things that were important,” says Ray. “It’s just like Paul said in Corinthians about ‘becoming all things to all people so we might win them.’ That's something this congregation was able to embrace in a big way.”

4. Effective ministry keeps an eye on past, present, and future

Rev. Yvette Massey has pastored three long-standing churches in her ministry years: Warren Memorial UMC in Atlanta College Park District, Red Oak UMC in Griffin, and currently, Central UMC in the heart of downtown Atlanta. Central, a primarily African-American congregation celebrating its 150th anniversary this year, has a rich history born from a dedication to human rights and equality for all.

Massey says it’s this history that gives the church its passion -- and propels it forward.

“Historical churches have a rich past, and if revisited frequently enough and from the right perspective, [this history] can be inspirational and motivational for the pastor and congregation to take the ministry to the next level,” says Massey.

Church is constantly searching for new ways to engage a modern people with centuries-old stories and scripture. In some ways, Massey says, when it comes to recreating the new from the old, historic congregations have a unique advantage.

“While the religious community seems to be running toward contemporary worship (and this is a good thing), there is still much room for the traditional church, whose history provides a lens through which to view and respond to current issues in a Christian manner,” says Massey. “[That’s the] lesson that can be learned from a historic church -- finding the balance between celebrating history and relevant ministry for the present; creatively finding ways to reinvent themselves and the retelling of their story.”

Rachel Reiff Ellis is a freelance writer in Decatur, Ga.