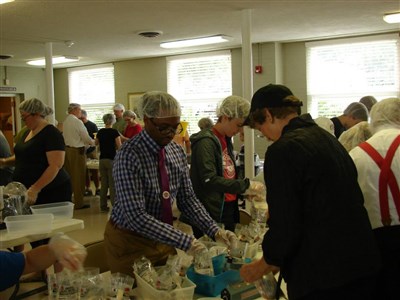 Two United Methodist churches in Decatur teamed up to provide meals for more than 20,000 hungry kids in the developing world. University Heights and North Decatur UMCs, pastored by the “clergy couple” team of the Rev. Stacey Rushing and the Rev. Dalton Rushing, respectively, purchased the meals through Stop Hunger Now.

The original plan was for the Revs. Rushing to challenge each church to raise money in hopes that there could be a combined event, feeding 10,000 kids; the church that raised the most money would host the packaging event. However, each church gave so generously and so supported the campaign that each church was able to hold a packaging event on September 14, and the number of children fed was more than twice the original goal.

Read the announcement of the event in the Decatur-Avondale Estates Patch.

See photos from the day.