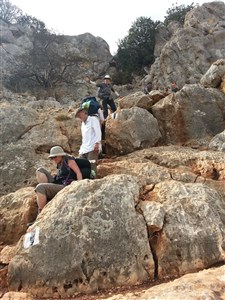 When I read an article on the Jesus Trail, a hiking trail from Nazareth to Capernaum, in Backpacker Magazine in 2012, I decided that hiking was how I wanted to travel Israel!

Since then I have carefully researched the trail (about 60 miles including all the excursions), lodging options, biblical sites to visit, read up on all the travel guides, watched numerous videos, and read numerous blogs. Finally on Oct.12, 2014 this trip became a reality.

We flew into Tel Aviv airport, took the train to Haifa HaShimona and from there took the bus to Nazareth. The Jesus Trail (which parallels the Gospel Trail) began in Nazareth where Jesus grew up.  On the first night we stayed in an old (restored) Muslim guesthouse called, Fauzi Azar Inn and was able to interact with the locals and have a tour of the old city, Nazareth, which is 70% Muslim and 30% Christian.  We visited the Church of Annunciation as well as the White Mosque.

The next morning, we headed to Cana on Jesus Trail through Zippori (Sepphoris) National Park. In Cana we visited Cana Wedding Church and stayed in Cana Wedding Bed and Breakfast, which is owned by an orthodox Christian couple.

On the third day we headed to Illanya near Kibbutz Lavi and stayed at Yarok Az Organic Goat Farm owned by a Jewish couple and spent a night in a tent!

On the fourth day we walked along the pasture and Kibbutz (a communal farm); we also walk on the remains of an ancient Roman Road which connected Nazareth to the cities near the Sea of Galilee. In Kibbutz Lavi we were greeted by the Deputy Mayor of Lavi who kindly explained about the Holocaust Memorial and the village in general. Then we climbed the Horns of Hattin, a double peaked volcanic formation to get the very first glimpse of the Sea of Galilee. It was such a beautiful sight and imagining Jesus’ journey to Capernaum, we couldn’t help but just sitting there tears welling up in our eyes. At dusk, we arrive at Arbel Guesthouse in Moshav Arbel, which was an oasis with gourmet food, swimming pool, and comfy beds.

The fifth day was by far the most beautiful. We had the view of the Sea of Galilee ahead of us all the time as we climbed up the Mt. Arbel and climbed down the Arbel cliffs, which was the most challenging hike for us as well as most beautiful. The trail ended in Capernaum which was Jesus’ base for ministry and where the old synagogue was located (its basalt foundation dates back to the first century BCE). From Capernaum, we went around the Sea of Galilee visiting the Mount of Beatitudes, Eremos, Bethsaida/Jordan River National Park, Tabgha, Magdala, etc. in a rental car. Then we drove down to Qumran, Al-Maghtes/Qaser el Yahud (Jesus’ baptism site), and enjoyed bathing in the Dead Sea at Kalya Beach then arrived at Masada Youth Hostel, driving through the beautiful Judean Desert. We encountered lots of animals including goats, sheep, donkeys, camels, etc. as well as local Bedouins (local nomads) on the way.

The next day we climbed Masada at 5:30 am to see the sunrise and experience the ancient fortress of King Herod (also the last Jewish stronghold against Romans after the Jewish Revolt in 66 AD).

The following three days were spent in Jerusalem in the Old City (four different quarters, Kotel, the Tunnel Tour, Tomb of King David, the Upper Room, Garden of Gethsemane, Via Dolorosa, Church of the Holy Sepulcher, Garden Tomb, etc.) as well as at the Israel Museum in the New City. A part of museum is The Shrine of the Book where the Dead Sea Scrolls are kept along with the Aleppo Codex.

We ended our 12 day trip in Tel Aviv on a beach of the Mediterranean Sea with the gorgeous sunset in our eyes.

It definitely was a cultural experience interacting with Muslims, Jews, Christians, and people who described themselves as nothing (probably meant agnostic or non-religious). It was awesome hiking beyond our expectations and a meaningful pilgrimage. It was also a budget trip, right around $2000 including the airfare.

Some people discouraged us from making the trip due to the volatility of the region, but we experienced nothing but hospitality, safety, beauty, and the Holy Spirit.  I would go back in a heartbeat!

Rev. Millie L. Kim was the organizer and leader of this hiking trip to the Holy Land. She serves as an associate at Alpharetta First United Methodist Church.