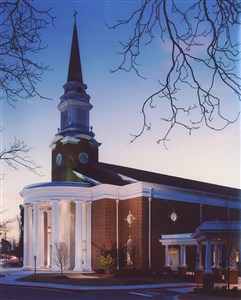 The effort to eliminate death and suffering from malaria has been greatly advanced by a donation from Dunwoody United Methodist Church and the OM Spruill Foundation. Senior Pastor Dr. Dan Brown announced last week that the church was contributing $35,000 immediately and had also designated half of the church's upcoming Christmas Eve Offering to Imagine No Malaria. That is expected to bring the total contribution to $50,000 or more.

The gift will save 5,000 lives in sub-Sahara Africa.

Brown said that "this gift is indicative of the compassion of the Dunwoody congregation. They have always been concerned about their neighbors both near and far. This is an opportunity to make a difference in the fight against the killer disease of malaria."

The Dunwoody UMC has a strong emphasis on mission and outreach both locally and globally. This commitment to Imagine No Malaria is an extension of previous donations through the North Georgia Conference. In 2008 the church was one of the first to weigh in with a $25,000 donation to Nothing But Nets, a forerunner of Imagine No Malaria.

The United Methodist Church was a founding partner of Nothing But Nets along with Sports Illustrated, the National Basketball Association, the United Nations Foundation, the Bill and Melinda Gates Foundation and others. In 2006 a child died every 30 seconds from malaria. The World Health Organization said that more than a million people died every year from this fully preventable, fully treatable disease.

Insecticide treated bed nets is still the most effective means of preventing people from being infected with malaria. But more was needed so in 2008 The United Methodist Church developed the more comprehensive approach called Imagine No Malaria in partnership with some of the same organizations with which they had previously been engaged.

In addition to bed nets, Imagine No Malaria includes other means of prevention, early diagnostic kits, affordable and accessible medication to treat those who are infected, communication and education about the disease and instructions of how to properly use the bed net. It costs only $10 to provide all this that will save a life.

There has been significant progress due to the efforts of Imagine No Malaria and other similar programs. The death rate is been cut almost in half. Still a child dies every 60 seconds. The prediction is that 650,000 people will die this year from malaria, about two-thirds of them children under the age of five and pregnant women. $10 provides a bed net with instructions on how to use it properly, affordable and accessible medications as well as communication and education about the disease.

The goal of Imagine No Malaria is to save millions of lives by raising $75 million. More than 300 hospitals and clinics, over 11,600 trained volunteer community health workers, and 13 national health boards provide the infrastructure in 16 countries in sub-Sahara Africa where 90% of the deaths occur.

Dunwoody's gift will make a major difference as it is combined with many other smaller and larger donations from people in over 900 United Methodist churches in North Georgia. The youth of the Trinity, Durand United Methodist Church, average attendance of 60, has given $1726. Johnson UMC in Watkinsville, average attendance of 34, has donated $730. To date more than $183,000 has been received from churches and individuals. The generosity of the Bill and Melinda Gates Foundation has provided funding for all administrative costs so every dollar given goes directly to fight malaria.

North Georgia Bishop B. Michael Watson said that he hopes every United Methodist congregation will participate in this very important life saving ministry this conference year. Together we can do more than imagine no malaria. We can actually see it eliminated.