5 Things Every Church Can Learn from a New Church Start 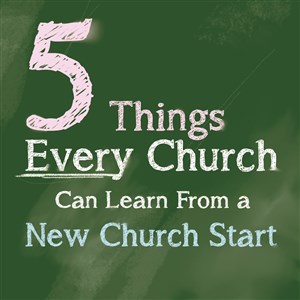 Whether your church began gathering in a high school gym last month or has had a pastor in the pulpit since 1850, your mission as a congregation of The United Methodist Church is the same: To make disciples of Jesus Christ for the transformation of the world. Three pastors leading new church starts in the North Georgia United Methodist Conference share what they’ve learned about being the church while starting a ministry from the ground up.

Maintain your sense of urgency

Fledgling churches can’t wait around for growth to happen organically. Rodrigo Cruz, lead pastor at The Nett Church in Lilburn, Georgia, says that fact alone infuses his work with a drive and purpose.

“When I was in an established church, of course, we always wanted to grow, but we were not that hungry about growing,” says Cruz. “Now, the only way we're going to grow is by literally working our tails off. Churches often allow themselves to go on autopilot; we don't have that luxury. We’re supposed to make disciples of people. We can't plan the number of years it will take to do it. Jesus may come back tomorrow.”

Think outside the offering plate

Thinking beyond your congregation when you’re looking for donors can lead to important partnerships that can strengthen your church both monetarily and ministerially. “There are folks who like to invest in new works, new church developments, but there are also people who like to invest in missional churches,” says Moore.

Expect more of your congregation

In order to get a church up and running, everyone has to pitch in. New churches look to their congregants to be more than just passive pew-sitters. Andrew Covington, pastor at Connexion Church in Covington, Georgia, says this all-in approach to church has resulted in a natural culture of service in his congregation.

“At Connexion, we say in our mission, ‘Be loved, be challenged,’” says Covington. “That challenge is an expected thing.” In fact, Covington says he finds that people who come to church are often looking to engage in service.

“In our experience, when someone doesn't start serving and get plugged in pretty quickly, they actually won't stay around. We've found that people embrace being asked to help out. It tells them that we believe in them, that we believe they have something to contribute.”

Covington says low-key volunteer opportunities are key. “We try to create entry points for people to serve, like running our Sunday morning coffee bar. It doesn't take much training to know how to pour a cup of coffee, smile, and be kind to someone when they come in,” says Covington.

Tune in to your community

When a new church is deciding where to plant itself, it has the opportunity to look at its surroundings from the perspective of a new kid on the block. Covington says the launch of Connexion was in part a response to the specific needs of the community, which has informed a large part of their identity as a church.

“We constantly look at what trends are happening around us — who's moving in, who's moving out — we relaunch our approach over and over again,” says Covington. “We look at each Christmas, each Easter as opportunities to reintroduce ourselves to the community, and maybe have a new emphasis on a specific need or area in the community. We really try to constantly be paying attention and aware of everything that's happening and going on around us.”

Moore helped birth Mosaic 13 years ago, and then several years later, was called to labor again to help it transform into something new. Moore says the transformation process helped emphasize the importance of spiritual discernment when determining what's right for a congregation’s season — whether that’s a change in leadership style, worship structure, staff configuration, or physical space.

“Understanding that each stage of the life of a church really does have its own needs and flavor, and I think that's in general what fuels churches,” says Moore. “If you're not interested in developing past the level you've brought a church to currently, I think you should ask yourself, ‘Do I have the capacity for evolution? Do I want to evolve?’”

This is especially important as a church grows, says Moore. “If you don't have a small group system that takes over pastoral care work once it’s too much for one pastor, you will eventually hit a wall,” she says.

Cruz notes that one key to breaking through that wall is equipping your congregation to be leaders. “When I was a pastor in an established church, my responsibility was to lead people,” says Cruz. “Now, I have to lead leaders, so they can lead others.”

Rachel Reiff Ellis is a freelance writer in Decatur.