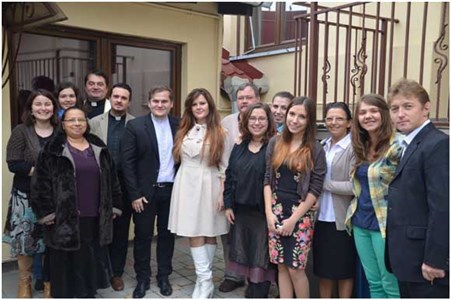 Last week I was blessed with the opportunity to witness a new birth and Jesus coming in power and glory in a new way and in a new place via our United Methodist Church. The place was Sibiu, Romania. Light from Light United Methodist Church was officially constituted on November 23, 2014. The church has been the vision and the hope of many people for the past 18 months. Its pastor, Rev. Cristian Istrate, tells the story of hearing the voice of God as he had walked the streets of Sibiu in 2012 saying, “Do not be afraid, ... I am with you, ... I have many people in this city.”  In faith, Cristian and others who heard this call undertook this great challenge. And with the help of God, this promising new ministry is now a reality.

There have been many ups and downs since the moment that Cristian heard God’s voice in 2012. They include Cristain and his wife Ligia moving from their hometown of Cluij-Napoca, Romania, to Sibiu, a city where they knew no one and had no family or friendly connections. The move and the days to follow were sometimes very lonely and difficult in this new and strange place. There was also the birth of their beautiful daughter Hannah who almost did not make it due to many complications during Ligia’s pregnancy. Today Hannah is a beautiful 9-month-old little girl with a wide smile and captivating personality.  Even in the midst of the greatest difficulties though, there have been some truly great days -- the days when God opened new doors, and days when God began to call people to hear the message of Christianity in a new way, and call people to become Methodists in this place.

Sometimes we hear stories like this and we find ourselves longing to be involved in what God is doing in faraway places. Three churches in our North Georgia Conference, Coldwater UMC and New Bethel UMC in the Athens-Elberton District and Kresge UMC in the Rome-Carrolton District have been a part of the planting of Light from Light UMC since the beginning. They have by taking hold of the idea that even though they are considered small churches, they could do great things because they have a great big God.

These churches and these people have supported the new church in Romania by giving of their resources in ways that made a difference in just the right moment. There has been more support too. An anonymous donor set aside the comforts of this life to make a difference.

I hope in this wonderful season that you are looking for a new understanding of the babe in the manger and the Savior this year. I hope that you are looking for Jesus to come in power and great glory right where you live and in the place God is calling you to give your life today. I pray that as you look for the perfect gifts that you will give, that you will also invest in something that will last until Jesus comes, be it a local ministry, a conference ministry, or something that God is doing on the other side of the world.

Rev. Allen Carmichael is the pastor of the Kresge UMC in Cedartown. Email him at allen.carmichael@ngumc.net.