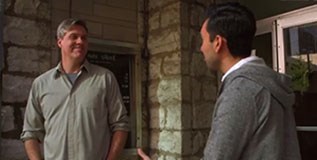 Chuck Knows Church is expanding to a new series, and this time Chuck is on a church committee!

The Committee, a humorous and thought provoking online series produced by Discipleship Ministries of The United Methodist Church, premiers Jan. 12. In it, the fictitious Park Grove Community Church has lost its way, lost its pastor and is closing its doors ... unless despite itself, it finds a new way of doing church with the help of Chuck. Can it become a vital congregation again?

With 4,000 churches closing their doors each year, the questions are important ones. Should an underperforming church shut its doors or reinvent itself? However, all congregations will find the subjects addressed in the series relevant for their ministries.

The Committee examines the struggles congregations face as they look toward a preferred future and uses real world topics to hopefully stimulate discussions in local churches.

Designed for both individual viewing and group study, each free episode also has a free downloadable study guide. A new video is released each month on YouTube and announced on the Chuck Knows Church Facebook page. Subjects promise to be thought-provoking and discussion worthy. Each episode is approximately 10-13 minutes.

“Chuck Knows Church is one of the most successful programs our agency produces,” said Steve Horswill-Johnston, executive director of communications at Discipleship Ministries. “In the original series, Chuck Knows Church attracts up to 50,000 views per week.

“For the new series, we have the same lead character, Chuck, but this time he is working on a committee with recognizable church member types. He makes some keen observations and asks some hard questions of the committee members, forcing them to determine just what ‘church’ is and if theirs is worth saving,” Horswill-Johnson said.

The original Chuck Knows Church series will continue, in addition to The Committee.