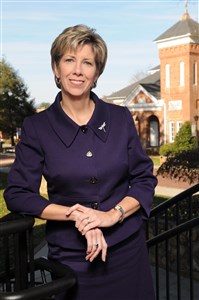 The annual list reflects the state’s most powerful and influential citizens who affect the lives and livelihoods of all Georgians.

As the 21st president of YHC, President Cox has worked to transform the College into a world-class four-year institution with more than 1,200 students across five academic divisions. She was instrumental in raising more than $70 million for the College’s Investing in the Future Capital Campaign and recently opened the $41 million, 121,000-square-foot Rollins Campus Center, the campaign’s focal point.

Several YHC trustees and alumni were also honored by the magazine including Chancellor of the Board of Regents for the University System of Georgia Henry “Hank” Huckaby, ’62, who was named Georgian of the Year. United Community Banks President and CEO Jimmy Tallent, ’70, and Georgia Speaker of the House David Ralston, ’74, were named to the 100 Most Influential Georgians list.