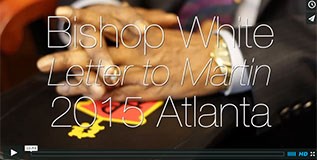 Each year Bishop Woodie White writes a “Letter to Martin” (Martin  Luther King, Jr.) on the state of race relations and racial justice in America. Bishop White is a retired United Methodist Bishop, was an active leader in the Civil Rights movement, and continues to teach and work for racial and social justice. He is the Bishop in Residence at Candler School of Theology at Emory University in Atlanta where he teaches, preaches, and works to equip future leaders of the church for the transformation of the world.

Bishop White is a graduate of Paine College in Augustaand Boston University School of Theology. From 1969-1984 he was General Secretary of the General Commission on Religion and Race of The United Methodist Church. Elected a bishop in 1984, he served the Illinois Great Rivers Area prior to his service in Indiana. He was president of the General Board of Discipleship from 1988-1992 and president of the Council of Bishops in 1996-1997. Bishop White was elected to the Martin Luther King, Jr. International Board of Preachers at Morehouse College in Atlanta, Georgia.

This year Rev. Joseph McBrayer recorded Bishop White reading the letter and has made the video available. It may be linked to on social media or your church website and it may be downloaded (in vimeo) to use in worship, Sunday Schools, Small Groups, or discussion groups for the purpose of further engaging in the conversation on Race and the Church in America.

I begin this letter mindful of the events that took place in our nation 50 years ago, events that changed the United States.

As you and other leaders of the Southern Christian Leadership Conference accelerated the challenge to the discriminatory practices prohibiting black people from registering and voting in several Southern states, a special campaign was launched in Alabama.

A march from Selma to Montgomery was planned. At the end, the demonstrators were to present the governor with a list of practices encountered by black citizens of the state. Hundreds gathered on Sunday, March 7, 1965.

State officials had determined the march would not occur and banned the planned demonstration.

As the marchers began to move across the Edmund Pettus Bridge in Selma, they were met by a sizable police presence on the bridge. Some of the police were on horses. When the peaceful marchers refused to disband, they were attacked by the police, beaten and trampled by horses. Mass hysteria erupted. Wounded and bloody, the nonviolent, peaceful protesters were turned back.

Millions witnessed the brutal attacks on television and in newspaper photos. So vicious were they that the day became known as Bloody Sunday. The nation was horrified to see peaceful citizens so brutalized as they sought to be granted the right to vote in their own country.

Only days later, Martin, you called for a second march. This time thousands responded. Celebrities, church leaders, pastors and ordinary citizens gathered — and the march was fully racially integrated. It ended on the steps of the Capitol in Montgomery, with leaders presenting their concerns, grievances and demands.

Five months later, in August, what is commonly called the Voting Rights Act was law. Congress passed the 1965 Civil Rights Act because of the bold leadership of President Lyndon B. Johnson. For the first time, black citizens anywhere in America had the right to register and the right to vote protected against intimidation, unfair and discriminatory regulations, fear of reprisals or violence.

Imagine, Martin, it was only 50 years ago, that the most basic right of a democracy, the right to vote, was guaranteed to black American citizens! Only 50 years ago!

In a few months, thousands of us will again gather at the Edmund Pettus Bridge. We will remember those who led the way, some even giving their lives, that we might today exercise the right to cast a ballot freely.

Sadly, we will do so in the face of new threats to that right, as many state legislatures enact laws to make it more difficult for citizens to exercise that right.

Martin, we are again reminded of the deep racial divide in America. The deaths of a number of unarmed black youth and men at the hands of police have drawn national attention. Those who died in Brooklyn, N.Y.; Cleveland; and Ferguson, Mo., were males in their teens. Two of the deaths — one in Ferguson and the other in Staten Island, N.Y. – went before a grand jury. Neither resulted in an indictment against the police involved. The failures to indict have resulted in thousands demonstrating in major cities across the nation. There is general outrage and anger in the black community and beyond.

Is America again to have two societies, one black (or non-white), and one white, separate and unequal? And composed, as many hold, of two justice systems, one for white citizens and one for non-white citizens?

Is there the belief that black life is not as valued in our nation as white life? Indeed, a new slogan has emerged: “Black Lives Matter.”

A national conversation on race is emerging. With it is coming the revelation that white and black citizens view race dramatically differently. Even in these two widely known incidents of unarmed black young men meeting death as the result of police action, a significant number of white citizens conclude the deaths were clearly the fault of the black men, while black citizens believe they were caused by an underlying racism that views white and black people differently. White life is valued more than black.

Perhaps, Martin, that is still what is at the heart of the great racial divide in America. Still, it appears, the matter of one’s worth as a human being is finally about the color of one’s skin — not the content of one’s character, morality, ability or competence. Indeed, there seems no correlation between scoring a winning touchdown or basket, or between one’s abilities, political positions or party and one’s determined ultimate worth as a human being. Could it be that in the minds and hearts of so many, skin color determines worth and value?

We continue to face a lot of work in this nation on the issue of race. At times, we appear to move backward and forward simultaneously. The truth is, Martin, the events of the last 50 years are evidence of how far we have come on our journey to become “one nation under God, indivisible, with liberty and justice for all.” But, the last 50 days are evidence as well of how far we have yet to go!

But, I still believe, Martin.