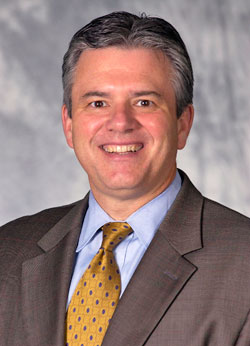 LAGRANGE, Ga.—Belmont University Provost Dan McAlexander was named today as the 25th president of LaGrange College after a unanimous vote of approval by the institution’s board of trustees.

McAlexander will assume the post on July 1, according to Board of Trustees Chair Bill Hodges. He replaces President Stuart Gulley, who will step down in June to become the president of Woodward Academy in Atlanta.

“In Dr. McAlexander, the Presidential Search Committee found a highly qualified, experienced and visionary leader who is passionate about making a difference in the lives of young people and is appreciative of LaGrange College’s mission of challenging the mind and inspiring the soul,” said Hodges, who also served as chair of the search committee.

“Belmont has experienced remarkable growth and innovation during Dr. McAlexander’s time as provost,” Hodges said. “His position there is comparable to that of a chief operating officer in an expanded role. This experience, applied to the accomplishments and momentum established under the leadership of Dr. Gulley, will provide LaGrange College with the continuity in leadership excellence we set as a goal from the beginning.”

McAlexander, who has served as Belmont’s provost for eight years, said he is grateful to have been chosen for the position.

“I am both honored and humbled by my selection as LaGrange’s next president,” he said. “The college is rich in history and tradition. It occupies a stunningly beautiful, immaculately kept campus, and it attracts talented and motivated students.

“Under the outstanding leadership of Dr. Gulley, its exceptional faculty and staff have established LaGrange as one of the South’s premier liberal arts colleges. Now, I look forward to working with the entire LaGrange family as we envision and enact the next chapter of the great LaGrange College story.

“My wife, Celeste, and I are excited to join the campus community and the civic and religious communities of LaGrange, including First United Methodist Church.”

At Belmont, which is located in Nashville, Tenn., McAlexander oversees the 250 full-time faculty, 80 adjuncts and approximately 200 staff that serve the university’s academic programs, enrollment services and student affairs. He is responsible for managing $60 million of the university’s $117 million dollar budget.

During his tenure, Belmont has experienced an overall enrollment increase of 68 percent, which translates to 2,000 additional students, while also seeing spikes in average ACT scores, from 24 to 26, and in the six-year graduation rate, from 50 percent to 67 percent.

Over the past eight years, the university has launched a number of new academic programs, including a school of pharmacy, Asian studies, social entrepreneurship and convergence media journalism.

Belmont has added 40 new faculty positions and constructed three suite-style residence halls and a $22 million health and science building while McAlexander has served as provost.
Before coming to Belmont, he worked in several positions at Hardin-Simmons University in Abilene, Texas, where he began as a faculty member and eventually rose to the rank of associate vice president for planning.

He has been married to Celeste Myall, a violinist, teacher and conductor, for 33 years. The couple has two daughters, Anne and Alice.

McAlexander was one of more than 100 applicants who sought the presidential post at LaGrange. Tom Courtice with the presidential search firm Academic Search assisted the college’s Presidential Search Committee, which was composed of a wide array of the institution’s constituents.

A four-year liberal arts and sciences college affiliated with the United Methodist Church, LaGrange College is ranked in the top 10 and as a “best value” among 95 Southern baccalaureate colleges by U.S. News & World Report. The college is the oldest private institution of higher learning in Georgia and has an enrollment of about 1,000 students.