Rethink Church - What if Church was a Verb? 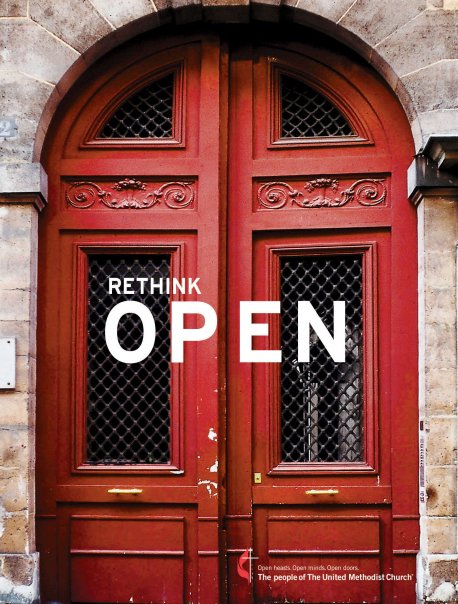 The buzz has begun. Even before the first ads hit the pages of national magazines or TV commercials begin to air, United Methodists are talking about a new awareness campaign.

Rolling out on May 6th,  Rethink Church will be unique because digital media will be a priority. Along with TV and print ads, Rethink Church messages will appear on YouTube and iTunes and through cell phone text messages.

"The idea is to provide a way for people to connect with the church in as many ways as possible," said the Rev. Larry Hollon, general secretary of United Methodist Communications. "Rethinking church and denominational marketing calls for an ability to tell the church's stories in many, many different ways, through many media and with different audiences."

The campaign will be introduced at the denominationwide training event for annual conference leaders at the end of January in Florida. In the months following, it will be featured in conference, district and regional events.

To some, Rethink Church will be an advertising campaign to continue the positive work of the successful "Open Hearts. Open Minds. Open Doors." campaign that began in 2001. Others will find it a conversation starter, inspiring church leaders to find creative ways to do church in different, more relevant ways. Rethink Church will also be a personal wake-up call inviting many to change old ways of thinking, believing and expressing faith.

"The advertising is perhaps the most visible ingredient of the campaign, but the strength of the campaign is the conversation it inspires and encourages," Hollon said.

Bishop Sally Dyck, president of the General Commission on Communication, calls Rethink Church "the self-study that the denomination has needed for a long time."

"Rethink Church will be an opportunity for people within the church to go deep into what is the meaning and purpose of church," Dyck said. "It will help the church make a transition into a new way of being in a rapidly changing world. Unless we Rethink Church, we won't be able to make the needed changes."

The campaign will use traditional and nontraditional mass media, everything from basic bumper stickers and T-shirts, to print ads in Parents magazine and radio ads on programs like "American Top 40 with Ryan Seacrest." The heart of Rethink Church, however, will be in the hands of local church leaders and congregations who will explore and live out the questions the campaign will pose. Most of the questions start with "what if?"

"Sometimes, those of us who attend church on a regular or even a sporadic basis get lulled into a bit of a 'Sunday experience' hypnosis," Graham said. "We forget we are all called to live church and the teachings of Jesus every day."

"Sunday will continue to be an important time for the church to express worship and honor the Sabbath," Hollon explains, "but we are saying that there are many doorways through which individuals may engage the Christian faith." As more and more people do not know or understand the practice or language of worship, "we need to provide alternative entry points that are relevant to them and that communicate in language they understand."

Graham suggested that church leaders will need to embrace the idea that it is OK for "church" to start out as day care, a ski trip, a basketball league or a Habitat for Humanity build. "Rethink Church is a wake-up call to remind us of the many needs in our own backyards and around the world, and to call us to action in any one of the thousands of programs, missions and initiatives The United Methodist Church is already engaged in," he said.

Hollon adds, "Engagement is not an end point, however. It is to provide deeper knowledge and experience of the life of faith. It is about providing people with a community in which to experience forgiveness and acceptance before God in a society that increasingly denies our deeper spiritual nature.

"The end result of connecting with the church is to enter into a community of faith that seeks to make disciples of Jesus Christ engaged with God in the transformation of the world even as we are ourselves being transformed."

Creators are aiming the four-year, $20 million advertising campaign at 18- to 34-year-old "seekers" -- people on a spiritual journey looking to fill the hole in their souls. United Methodists have been on a mission to bring three generations into the life of the church: baby boomers (born 1945-1964), post-moderns or Gen X (1965-1977) and millennial, Mosaics or Gen Y (1978-2000). Research shows that these generations have been difficult to involve in mainline churches. The reasons cited include church relevance, negative impressions of Christians and limited opportunities for involving young people.

"Younger people and people who haven't been a part of the church will be attracted by the ads," said Dyck. "I also think it will invite people who have been disappointed with the church or even hurt by it to rethink and reconsider what church is really about."

Levin Van Sant, chairperson for evangelism and outreach in the Peninsula-Delaware Conference, saw a United Methodist News Service story about the upcoming campaign and was quick to get on the Rethink Church bandwagon.

"It's the perfect platform for us to show people that church can be fun and flexible," Van Sant said. "And to show United Methodists aren't stuffy -- that we do things for others. We're a very missions-minded people, and for us, church isn't just a noun. We are a verb."

"Rethink Church is ultimately an invitation to missional Christianity," Hollon said. "It's about being transformed, doing those things that transform us individually and transform the world. If we rethink church, our spiritual yearning and our desire for change become integrated. We focus on faith as life lived in mission, because we are called by God to be people who serve."