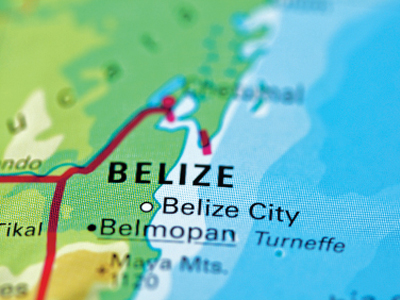 While many teenagers were hanging out at the pool, 15-year-old Whitney Kendrix and other youth from Arbor Pointe UMC were baking under the hot sun in Belize, showing their love for youngsters coming to vacation Bible school.

The 15-year-old was one of 17 Arbor Pointe members who visited the Central American nation this summer – the second foreign mission trip in the church’s five years. Arbor Pointe is a new congregation in the Gainesville district.

“Experiencing a mission trip allowed me to open up and share the love and joy God has given me,” said Kendrix. “The pleasure of sharing my story with other people from another culture has filled my heart with happiness.”

The missionaries held VBS for 185 children, ministered to troubled children in a youth hostel, visited the sick and terminally ill, built the foundation for a family’s house, led an adult Bible study, and shared the gospel of Jesus Christ to numerous children and teenagers.

On the first day, about 70 children showed up for VBS, according to senior pastor Joe McKechnie. The next day, that number swelled to more than 100. By day three, 120 young people had come out, and the final day ministered to more than 200 children and teens.

“Our presence created quite an excitement, and although there was no internet, television, or telephone, somehow people knew about the awesome things that were taking place, and more and more people came out each day,” said the pastor.

The Jefferson Recreation Department donated old uniforms for the children in Belize, suitcases full of basketball and soccer jerseys.

“Those kids were so proud of their new clothes, and they literally wore them the rest of the week. You would see the little boys (and some teenage boys) wearing jerseys from an area with which they were totally unfamiliar. The villages were poor – most homes had no electricity or running water, and the children would play soccer in the streets without shoe, unphased by the wild monkeys,” said McKechnie. “We were in a remote part of a jungled area. There were literally monkeys swinging from the trees, as well as wild horses, bulls, and even crocodiles.”

Patty Moore took two of her sons, Aidan, 14, and O’Bryan, 11. “Before we left, so many people said ‘It’s going to be the experience of a lifetime,’ or ‘You just won’t believe how life changing your trip is going to be.’  I just nodded in agreement at the comments, but never dreamed just how true those words would be. We set out to show the people of Belize the love of Christ and all left there knowing we received a gift in return that words really can’t describe.

Michelle Thornton, a married mother of two in Hoschton, says that the change of pace made a lasting impression on her life. “We were so far away from home, but yet so close to God and his people,” she declares. “The glorious simplicity of the land and the way in which they live their daily lives makes me envious of the peace and fulfillment of focusing solely on God and each other without all the distractions we typically experience. I miss all of it already.”

Such a large-scale foreign mission trip can be a daunting task, especially for a new church that does not yet have its own building. The congregation worships at 10:30 a.m. Sundays at West Jackson Middle School.

Building plans are on the horizon, with a recent property purchase. In the meantime, McKechnie emphasizes his church’s desire to see God make a difference in the community.

This article appears in the August 7 edition of the North Georgia Advocate. To subscribe or renew, visit www.ngumc.org/advocate.