Thompson, who heard his call at early age, now serves in Panama 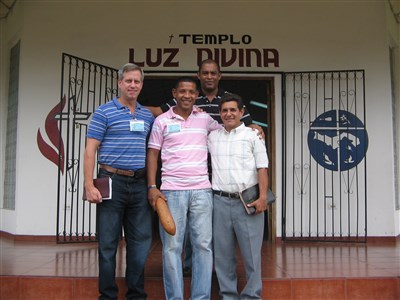 12/3/2010
By Alice M. Smith
The Rev. Rhett Thompson knew from his teenage years that God was calling him to be a missionary and was guiding every step along the way.
At first Thompson thought his calling was to medical missions, but as a student at Davidson College he felt God leading him into the pastoral ministry. He enrolled at Emory University’s Candler School of Theology and embarked on a Georgia connection that has supported him during 25 years of service in the Republic of Panama through the United Methodist Church’s General Board of Global Ministries (GBGM).
“The only [local] church I have actually worked at [in the U.S.] was Bright Star UMC in Douglasville where I was youth minister for three years while I was at Candler,” Thompson said during a recent itineration when he visited supporting churches in Georgia, Alabama, South Carolina.
During his Candler years, another Douglasville church, First UMC, also played a role in cementing his call to mission when Thompson twice participated on Volunteers in Mission teams to Mexico sponsored by the church.
“The experiences on those trips confirmed my sense of calling to a cross-cultural mission,” he said. The fact that he had chosen to study Spanish as a youngster “is one of many small details in which in hindsight I have seen the hand of God.”
He still receives missionary support from Bright Star and Douglasville First, along with several other North Georgia churches: Lawrenceville First UMC, Bethlehem UMC, Kingswood in Dunwoody, East Cobb UMC and West Point UMC. His home conference is North Alabama.
Currently Thompson serves as pastor of the Pedregal congregation, located on the outskirts of Panama City and part of the Evangelical Methodist Church of Panama. His duties include pastoral responsibilities like preaching, teaching and administering the sacraments, but he is also involved in a number of national church programs whose goal is improving the lives of the people of Panama.
Chief among them is work with the Ngobe Indian Mission. The Panamanian church has helped train 24 community health promoters who work in about 19 Ngobe communities teaching basic hygiene and disease prevention. “If you have proper sanitation, you can avoid many killer diseases such as cholera,” Thompson said.
One of the most important parts of the program is working alongside community residents to build latrines. The church, with permission, revamped a governmental design and by using local materials was able to cut the cost of building a latrine from $450 to $70. The church has built 160 latrines so far this year.
Among Thompson’s other national duties are coordinating the Volunteer in Mission teams that come to Panama and helping develop a camping ministry similar to North Georgia’s Camp Glisson.
The Evangelical Methodist Church in Panama celebrated its 100th anniversary in 2006 and though small in number – there are only about 15 churches in two provinces – its influence is much larger in the country. The Pan-American Institute, a private school for kindergarten through high school students, was started by Methodists also in 1906. Today it is one of the premier educational institutions in Panama and has an enrollment of 3,000. A satellite school exists in Chiriquí Province near the Costa Rican border.
Recognizing that paying the tuition fees at a private school means an enrollment primarily of middle- and upper-class children, the schools offer night classes in Panama City and Saturday classes in Chiriquí that are much more affordable.
When asked how United Methodists in the U.S. can support the work of Methodists in Panama, Thompson suggested giving to the three Advance projects in Panama: Walter Reitz Child Development Center in Panama City (#14859A); the Comprehensive Community Health Project to the Ngobe Indians (#14969A): or the Camping Ministry (#3020651).
“Salary support [through the Covenant Relationships program of GBGM] is important because it makes it possible for me to be in Panama.” said Thompson. “But you can only do so much with your presence. You also need some funds to carry out the ministries.”
While there have been difficult moments in his missionary work – as there is with every endeavor in life -- Thompson is convinced he is “in the place God has called me to be. For that and for all the wonderful people from both Panama and the USA who have been partners in ministry, I am truly thankful.”
News