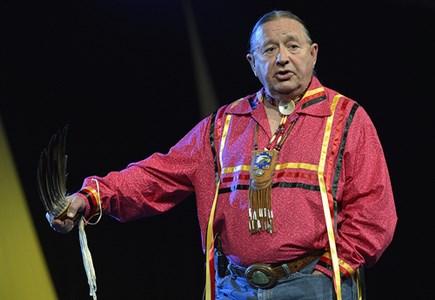 Delegates relived some painful chapters in the lives of Native peoples during an April 27 “Act of Repentance toward Healing Relationships with Indigenous Peoples.”

“There’s a lot of history that has been concealed; you have to go and dig it up,” said the Rev. George Tinker, a citizen of the Osage Nation and a professor at Iliff School of Theology in Denver.

Tinker began that excavation by recalling the 1864 massacre at Sand Creek, where John Chivington, a Methodist pastor, led 700 Colorado territory militia in the killing and mutilating of some 165 peaceful Cheyenne men, women and children.

After refusing to meet with Cheyenne leaders, John Evans, a Methodist serving as governor of the Colorado territory, ordered the massacre.

In spite of that action, Evans is celebrated as the founder of the University of Denver, Northwestern University and Garrett-Evangelical Theological Seminary in Evanston, a city named for the Methodist leader.

Tinker also recalled that 30 years earlier, the Tennessee Annual Conference of the Methodist Episcopal Church South voted to recall missionaries who resisted the removal of Cherokee Indians from their native land in North Carolina. “The removal had one goal,” said Tinker, “to open fertile farmland for white Christians.”

“It’s way too early to talk about reconciliation,” said Tinker. “It’s like asking an abused spouse to live with (the) abuser without any change. … Apologies don’t do anything.”

Tinker said repentance is not something done once. It is a wJanuay of life. “We have to give up some of the things Americans hold dear (and) make sure all have genuinely equal access to the riches of the world.

“I respect The United Methodist Church for beginning this process,” said Tinker, “because it is fraught with danger, it takes a great deal of courage and it is difficult and complex.”

A closing litany confessed that “while some in the church protested its transgressions against indigenous people, the dominant pattern has been one whereby both its silence and its active support the church has participated in the violation, the exploitation and even the killing of indigenous people. Our congregations and ministries benefited from Native lands acquired unjustly when it was not a result of outright confiscation.”

As the service concluded, participants were encouraged to pick up symbolic stones from the “river of life” scattered in the worship area and take them back to their own communities “as a covenant to continue to listen and to walk the journey of healing with one another.”

Saturday, April 28, became a day of rest for members of the Independent Commission and Discipleship legislative committees, while members of other committees picked up speed to process as many petitions as possible before the 9:30 p.m. closing bell. Any legislative proposal not acted upon by adjournment time will not be considered unless 20 delegates pull it up for consideration.

The Committee on Ministry and Higher Education agreed to ask the plenary session to approve legislation that would end guaranteed appointments, but they added a provision for an eight-member team to develop a list of issues and concerns to guide the cabinet and bishop when a full-time missional appointment is not available for an elder.

Cabinets will be asked to report annually to the executive committee of the board of ordained ministry on which elders have not received an appointment and why. Cabinets will also be asked for a report on the age, ethnicity and gender of each elder without a full-time missional appointment. This data will be evaluated by the conference and jurisdictional committees on the episcopacy.

Delegates and visitors gathered under the brilliant Tampa sun for a noon rally against the privatization of prisons, led by the United Methodist Task Force on Immigration.

Participants in the April 28 rally sang “We Shall Overcome” while carrying signs saying, “Profit from Pain is Inhumane.”

The rally celebrated the establishment of a new investment screen adopted by the United Methodist Board of Pension and Health Benefits. That screen, adopted in January, forbids board investments in companies that derive more than 10 percent of their revenue from the operation of prison facilities.

The policy change resulted, in part, from requests from the task force.

“We believe that profiting from the incarceration of persons is immoral and antithetical to our Christian faith,” said Bishop Minerva Carcaño, co-chair of the task force, in a letter to the board. “The fact that an inordinate number of persons incarcerated in the U.S. are people of color and persons who come out of poverty raises serious concerns about investments in prisons serving to perpetuate racism and classism.”

“Something is wrong,” exclaimed Iowa Area Bishop Julius Trimble during the waterside rally. Trimble who is co-chair with Carcaño, said, “People are detained for being poor, out of status or because they don’t speak English.”

Desmond Mead, a second-year law student who has been incarcerated, said detention is a “world problem,” not just a Hispanic or black issue.

Warren said the problem of private prisons is not a political issue for United Methodists, but a “family dinner table conversation.”

The Detention Watch Network, an advocacy organization, reports that in 2009, some 49 percent of 385,524 immigrants were detained in 30 private prisons, at an average daily cost of $122 per day, or $1.7 billion.

While there were are no legislative activities scheduled for Sunday, delegates and visitors are invited to worship in Tampa area churches where bishops are scheduled to serve as guest preachers.

On Sunday evening delegates will return to the convention center for a service celebrating the 20th anniversary of Communities of Shalom, the 40th anniversary of the General Commission on the Status and Role of Women, Archives and History, five ethnic national plans, Strengthening the Black Church for the 21st Century, the Four Areas of Focus, Global AIDS Fund, and the Advance. The General Commission on United Methodist Men will note the 100th anniversary of Girl Scouts and present a Good Samaritan Award. The evening will conclude with the consecration of 17 deacons and the commissioning of 23 missionaries.

* Peck is a retired clergy member of New York Annual Conference attending his 12th General Conference, four times as editor of the Daily Christian Advocate and three times as a member of the UMNS news team.