START brings leaders together to learn and grow 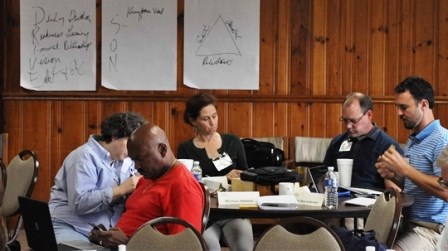 The program was centered around Mike Slaughter, lead pastor of Ginghamsburg Church, a United Methodist church in Tipp City, Ohio.

Slaughter, the author of several books including, “Unlearning Church”, “Christmas Is Not Your Birthday”, and “Change the World”, centered his talk on pastoral leadership, drawing on his own experience and reminding START participants of the urgency of their work.

Now reaching the end of its first year, the START program has been a valuable resource for a number of pastors in the North Georgia Conference. Participants have had the opportunity to meet with and learn from district superintendents, innovative church leaders in the conference, and denominational leaders at the general church level.

At the recent retreat at Hinton, Slaughter and his wife, Carolyn, talked about personal leadership and ways in which they have decided to be intentional in their own faith development. Slaughter described his morning pattern of early rising, prayer and scriptural devotion, and exercise, and he challenged members of the group to take on a similar pattern.

The following morning, Slaughter talked about church leadership, especially from the perspective of his experience of leading Ginghamsburg church from a church of about 100 members to a church that regularly sees 5,000 in worship each week. He emphasized that lasting change takes time.

He spent a significant portion of his time speaking about local church structures and the way in which he envisions Ginghamsburg as a church that empowers people to serve rather than a church that “controls” ministry from the top down.

After he told the story of his role in Ginghamsburg’s revitalization (the church continues to sit in an area of declining population growth), Slaughter spent nearly two hours answering questions from participants about everything from his own personal experience to his advice to young pastors.

Terry Walton of Gainesville First UMC talked about his daily routine and showcased the puppet ministry that has been a hallmark of his interactions with children of all ages. Those present also had the opportunity to spend time together visiting, sharing stories, and encouraging one another.

A new class has been nominated to begin in January of 2013 and those invitations will be going out in the next few weeks.