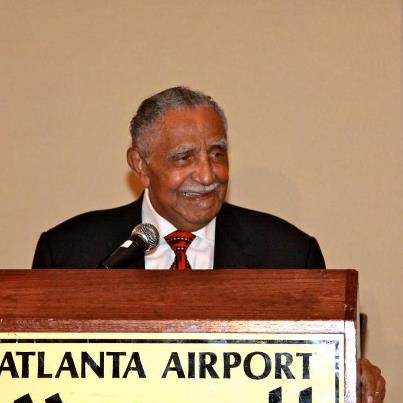 Lowery, who accepted the award on the night of the second presidential debate, told the more than 300 people gathered that he only had one thing on his mind: voting.

“I hope you get fired up…we gotta turn out to vote,” said Lowery. “We’ve got to get out and hustle this time. When you go back home, turn out everybody you know.” He added, “God can turn this country around…God is able.”

Lowery is a leader in the American civil rights movement and a retired United Methodist minister. Lowery helped lead the Montgomery bus boycott after Rosa Parks’ arrest in 1955. In 1957, along with the Rev. Dr. Martin Luther King, Jr., he founded the Southern Christian Leadership Conference and led the organization as president from 1977 to 1997. President Barack Obama awarded him the Presidential Medal of Freedom in 2009, the nation’s highest civilian honor.

In 2008, after the historic election of President Barack Obama as the 44th President of the United States of America, and the first African American President, then President-elect Obama called and personally invited Lowery to deliver the benediction at the inauguration. Lowery recalled standing on the stage located on the steps of the United States Capitol on January 20, 2009 facing the Lincoln Memorial. He says he could not see that far, but he heard the voice of the Rev. Dr. Martin Luther King, Jr. from the “I Have A Dream” speech delivered from the steps of the Lincoln Memorial in 1963. Lowery said, “They didn’t vote on race and color, they voted on content and character.”

During the banquet, the Rev. Dr. Bernice Kirkland was named the 2012 Distinguished Alumna. Kirkland is an ordained elder in the North Georgia Conference where she currently serves as the pastor of Hoosier Memorial United Methodist Church. Her pastoral appointments have been diverse, including chaplain residency, cross-racial ministry, and congregations experiencing historical change. She serves the North Georgia Conference on district and conference level in various capacities.

This year, the seminary also presented a 2012 Emerging Trailblazer award to the Rev. Olujimi (Olu) Brown. Brown is the lead pastor and founder of Impact United Methodist Church in Atlanta. He established Impact Church in January 2007 and attendance has grown progressively to more than 500 weekly in just one of its three weekly worship services.

*Hygh is the associate general secretary, director of communications, for the General Board of Global Ministries. He also serves on the board of trustees of Gammon.