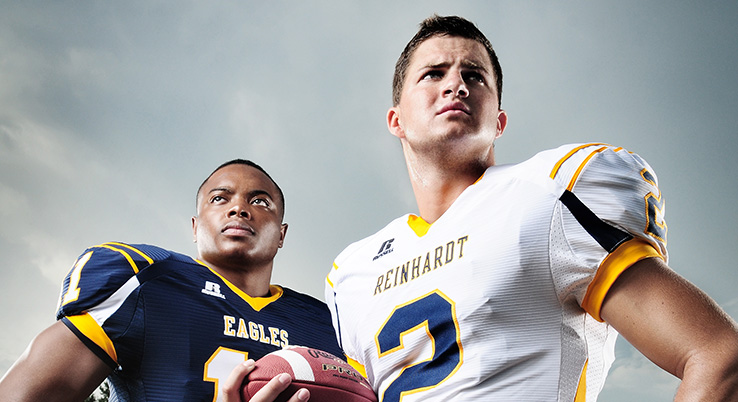 Excitement is brewing between two new Georgia football teams. On August 31st at 6:00PM the Reinhardt University Eagles will play their very first football game against the Mercer University Bears, a team that is breaking out of their 72-year hiatus. With the entanglement of the teams’ likenesses and differences, it is an intriguing pairing when the teams are lined up side by side.

When looking at these teams from a distance, they appear to be decent opposites. Reinhardt coach Danny Cronic is quite content with being in the West Division and a part of the Mid-South Conference; however Mercer is placed in the larger South Division and is a member of the Patriot Football League, a non-scholarship program. The Bears are also in the National College Athletic Association (Division I) while the Eagles are members of the National Association of Intercollegiate Athletics.

The game will also be a battle of denominations with Reinhardt representing the Methodists and Mercer signifying the Baptists. The schools’ values are one in the same, however. Both head coaches have aimed for a team with spirituality and with a respect for their own education. They do not just want talented football players, but young men that will represent the good of the world.

The Bears have a total of 95 players. 60 of those players are returning from last year’s game-less season while 35 are brand new. Reinhardt has a total of 75 red-shirt freshmen along with 75 more new freshmen players, providing Reinhardt with more players that have a year of college practice experience under their helmets. While Reinhardt has absolutely no football history, Cronic and his fellow coaches were very impressed with their practice season and see a great amount of skill in their new players.

Many paths have crossed between the coaches of these competing teams, connections that will make an interesting game.  Justin Brown came to Mercer from coaching at Presbyterian in South Carolina. He is also a graduate of Furman, where Mercer’s head coach, Bobby Lamb, spent 29 years of his football career. Coincidentally, Ryan Anderson, an assistant coach to Reinhardt, attended Presbyterian. There, he completed an internship with the Big South Conference office in North Carolina.

Bobby Lamb, started his 29 years at Furman as a football player and progressed to head coach, a position he held for 9 years. He was named the Southern Conference’s Player of the Year during his senior year at Furman and later earned the Conference’s Coach of the Year award. Coincidentally, Lamb left Furman the same day of Mercer’s football reinstatement.

Danny Cronic coached for 36 years around the state before coming to Reinhardt. After playing football for the University of Georgia, he coached at Cherokee, LaGrange, and East Coweta High School. He also coached at West Georgia and Middle Tennessee State University. He is in the Coweta and Cherokee County Sports Halls of Fame and has been awarded the title of Regional Coach of the Year by the Georgia Athletic Coach Association 4 times. Cronic has ties to Mercer as well. The Bears’ field is named after Judge Homer and Ruth Drake, who have attended church with the Reinhardt coach.


“There are a lot of connections with this game,” says Cronic. The hope is that these links will give the Eagles the advantage, although they will not be playing on their home field. Mercer and Reinhardt are coming into the world of football with similar histories. With both teams coming in with first-game jitters, it will be a measurement of talent and preparation.

Reinhardt fans are already excited and eager for the football season. Tickets for the Mercer game sold out in 30 minutes. Their season tickets are sold out and the first home game on September 7th is bound to attract a crowd. Photos of the Mercer vs. Reinhardt game on Saturday August 31st will be posted in the NGUMC photo gallery.