YOUNG HARRIS, Ga. – Young Harris College welcomed its largest-ever entering class comprised of 462 freshmen. Fall 2013 marks the largest enrollment in the history of the College with 1,118 students on campus, continuing a trend that began in 2007 of steadily increasing enrollment figures.

“We are thrilled that for the seventh consecutive year we have broken overall enrollment records and are pleased to welcome the largest freshman class in the College’s history,” said YHC President Cathy Cox.

The previous freshman enrollment record of 437 set in Fall 2012 was surpassed by more than 20 students this fall. Since the transition of YHC to a four-year institution began in 2006, the College’s total enrollment has increased by 86 percent.

“Our efforts to inspire interest in YHC are paying off in a big way as is evidenced by this year’s record-breaking freshman class size and the largest total enrollment the College has ever seen,” said Vice President for Enrollment Management and External Relations Clint Hobbs, ’88. “These are exciting times for YHC, and I could not be happier for our students who get to be here during such a transformative era at the College.”

The academic year officially opened with the annual Academic Convocation on Aug. 14, and the College buzzed with activity as new and returning students prepared for the year with an exciting lineup of Welcome Week activities.

On Aug. 18, 262 first-year students kicked off Welcome Week with a service event sponsored by S.E.R.V.E. (Service, Empowerment, Responsibility, Voice and Engagement) at the Hinton Rural Life Center in Hayesville, N.C. The group performed general cleanup at the facility and stacked wood for the center’s firewood ministry, a service for those in need from the local community during winter months.

“S.E.R.V.E. events are designed to help show that being a YHC student is much more than taking advantage of what happens on campus throughout the next four years,” explained Director of Campus Activities Ashley Randall. “It’s also about being compassionate and generous and learning about the community in which they live.”

To conclude the week of activities, students enjoyed a horseback riding session at Brasstown Valley Resort on Aug. 25, as part of the Office of Student Development’s new “YHC Outdoor Adventures” program. Additional excursions will be planned throughout the year to give students the opportunity to familiarize themselves with their new “home” in the north Georgia mountains. 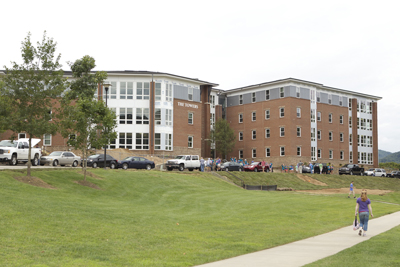 The week also marked the official opening of “The Towers,” a new residence hall that provides an additional 226 beds for incoming freshmen. The facility is configured in “pods,” or small communities consisting of students living in different sizes and styles of rooms surrounding a country-club-style bath area.

“This style of housing is extremely popular for colleges and universities because it encourages incoming students to frequently interact with their classmates,” said Assistant Dean of Students Stuart Miller. “We want students to enjoy themselves and meet some lifelong friends during their first year on campus before moving on to other residence halls.”

The innovative pod concept is a growing trend in residence life nationwide. It provides both living and learning spaces that encourage student interaction and foster a sense of community during their formative semesters on campus.

Each pod features large and inviting study alcoves and lounges with comfortable sofas and flat-screen televisions, providing students with ample common areas to study and socialize. These spaces within the building give resident assistants the opportunity to regularly interact with students and introduce unique programming.

“The new residence hall allows us to begin to implement a progressive housing model at YHC that targets the specific needs of each class,” said Vice President for Student Development Angi Smith. “Our goal is to offer specific programming for student communities and provide for increased responsibility and freedom for the students as they progress at the College.”

The housing was designed to LEED (Leadership in Energy and Environmental Design) standards and is expected to earn LEED certification.

In addition, YHC has more than doubled the size of its faculty in the last six years and hired additional staff to support the new academic offerings and student programming.

About Young Harris College
Young Harris College is a private, baccalaureate degree-granting college located in the beautiful mountains of north Georgia. Founded in 1886 and historically affiliated with The United Methodist Church, Young Harris College educates, inspires and empowers students through the highest quality liberal arts education. The College currently has more than 1,000 students across five divisions—Education, Fine Arts, Humanities, Mathematics and Science, and Social and Behavioral Sciences—and plans to increase enrollment to 1,200 over the next few years. The historic campus in Young Harris, Ga., is currently undergoing major campus improvements to accommodate the College’s growth, including recent completion of a 200-bed, LEED Silver-certified residence hall, Georgia’s first higher education facility north of Atlanta to achieve this certification, a 57,000-square-foot, LEED-certified recreation center, the second higher educational recreation facility in Georgia to achieve this certification, and a 248-bed, apartment-style residential village. In 2011, the College was granted candidacy for NCAA Division II athletics. YHC is among fewer than 300 colleges and universities nationwide named to the 2013-2014 list of Colleges of Distinction. For more information, visit yhc.edu.