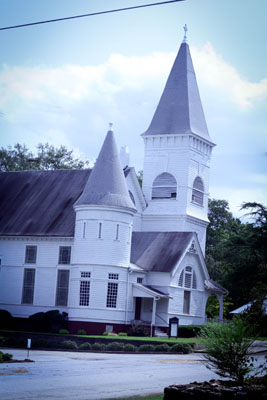 In the last few years, Georgia has become a new stomping ground for movie and TV show sets. Extras castings agencies have had plenty of work to go around, and celebrity spottings have gone from a source of excitement to a typical occurrence while stopping by the grocery store.

The small, historic town of Senoia is way ahead of this trend with a film history like no other. As the worlds of television and movie-making continue to use the city’s classic set-up, Senoia United Methodist Church and its surrounding community have reaped the benefits.

The historic district of Senoia is scattered with homages to the AMC Network’s “The Walking Dead”, and dedicated plates litter the side walk for every movie or show that has used a piece of the city.

When the town was first scoped out by a producer of “I Love Lucy” the community most likely contained around 300 people, and there were few shops and restaurants. A studio was built nearby in 1983, but Senoia mainly had small, unnoticeable appearances until the movie “Fried Green Tomatoes”. It first put the city on the map as a holder of movie history.

The Choir Director and Organist of Senoia UMC, a resident since 1993, remembers the changes that the town went through from film to film. “’When Drop Dead Diva’ and ‘The Walking Dead’ came in,” recalls Jim Preece, “they used our buildings and store fronts. It gave fans a reason to actually come into the town”. A peek into their historic district quickly provoked interest in movie watchers, aiding in their new population of around 3,000. As the town size grows, the industry’s access to movie extras does too, which has provided the community with thousands of temporary jobs during film projects.

The increase of population and of money going into the community allowed for more stores and restaurants to come in. Preece, who is also Chairman of City Planning, opened Table Talk, a unique gift and decorative shop. Shoppers will find zombie themed items around the store, including bullet shells picked up around the shop after a “shoot-out” scene was filmed inside for “The Walking Dead”.

Since the series has filmed, his store has seen an impressive increase in sales. Businesses are generously compensated for any time they have to close. They can earn more from a week in the movie industry than from a week of sales.

“The people here are really open to the filming and to visitors. I think they enjoy being a part of it,” shares Senoia UMC’s Pastor, Rev. Erik Mays. After a current total of 27 film projects, casts and crews are a special piece of the community. “It has brought vitality to the town from the beginning,” adds Preece.

Mays, who arrived this June, has already enjoyed sharing the fame of the area with eager visitors that drive by. Standing on the steps of Senoia United Methodist Church provides a snapshot of movie history in every direction. Looking out across the street, a green patch of land is the remains of a make-shift cemetery for the movie “Pet Cemetery”.

To the left lands the eyes on the famous house in “Fried Green Tomatoes”. Its current resident is the oldest member of the church, a 97 year-old woman immune to tourists that walk by and take pictures. Like standing in the movie itself, the bridge is steps away from the house’s front porch.

A look at the church is a look into a scene from “Fighting Temptations”. Repainted and given a new name, Senoia UMC played the role of a Baptist church. By the end of filming, the building received a free repainting along with enough money to improve their roof.  However, the use of their sanctuary was cautiously avoided due to the antique, hand carved pews, still in use today.

The church’s fellowship hall has been the host of many extras and film crews. Many members of Senoia UMC even rent out rooms to crew members for extra money. They make for quiet guests with their busy schedules and frequent visits home on the weekends. The church has also seen an increase in weddings. Several brides have said that they noticed the city from a movie or show and fell in love with its charm.

Over the years the church has witnessed an increase in worship attendance which is currently at about 95. A noticeable change in age is also graduating. “Our congregation is getting younger,” explains Mays. At age 32, he is the youngest pastor of Senoia in 40 years. As more young families come in, the move to his new church home seems comprehensible.

Since his arrival, no film crews have asked to use their parking lot or fellowship hall; however, with the history of these common requests, the new pastor looks forward to ministering to any and all visitors. “Even if it’s something as simple as inviting them to service or handing out bottled water, I hope we can reach out to them in some way,” says Mays. Already, he has seen a strong commitment in the congregation to reach out to their growing community, to “go beyond the doors” of Senoia United Methodist Church.

A trip to Senoia is a trip worth taking. Throughout the years, the community and the church have maintained a small-town persona. When visitors stop by, chances are, residents already know why they are there, but don’t be shy. Most will gladly share the history of their Georgian Hollywood and their experiences with film crews and zombies.

Churches are often the go-to for films to set up camp. Many United Methodist Churches within the North Georgia Conference have lent a hand. Tyler Perry has used Decatur First UMC’s parking lot on several occasions. Saint Mark UMC also enjoyed hosting the catering for a Tyler Perry movie. The show “In the Heat of the Night” was often hosted by Shiloh UMC in Covington, as well as Inman Park UMC. In 1980, “Hopscotch” used Atlanta’s Trinity UMC as their catering spot during filming.

Please, continue to share with us how your church received their “big break” in the film industry.