The Visit: Emory Students Learn From Their Presidential Distinguished Professor The Dalai Lama

Students of Emory University received an opportunity of a life time: the chance to be in the same room with one of the world’s most well-respected spiritual leaders. His Holiness The Dalai Lama made numerous appearances of various sizes during his stay in GA, but the lecture Wednesday was within the Glenn Memorial United Methodist Church, filled with hundreds college students.

Along with the school’s president James Wagner, The Dalai Lama sat alongside Emory’s Student Government Association’s President, Raj Patel. His Holiness gave him an assuring squeeze of the hand before Patel stood up to help introduce their special guest. Throughout the event, student and Presidential Distinguished Professor sat side by side.

When The Dalai Lama speaks he is often soft-spoken, but his voice is youthful at 78 years old. Often he would laugh and make jokes with a contagious smile, stifling the nerves of the students that received a special invitation to personally ask His Holiness a question. Students Scott Parent, Rebecca Berge, FikreJesus Amahazion, and Edmund Xu inquired insight on the economy, human usefulness, the prison system, and respect within society. 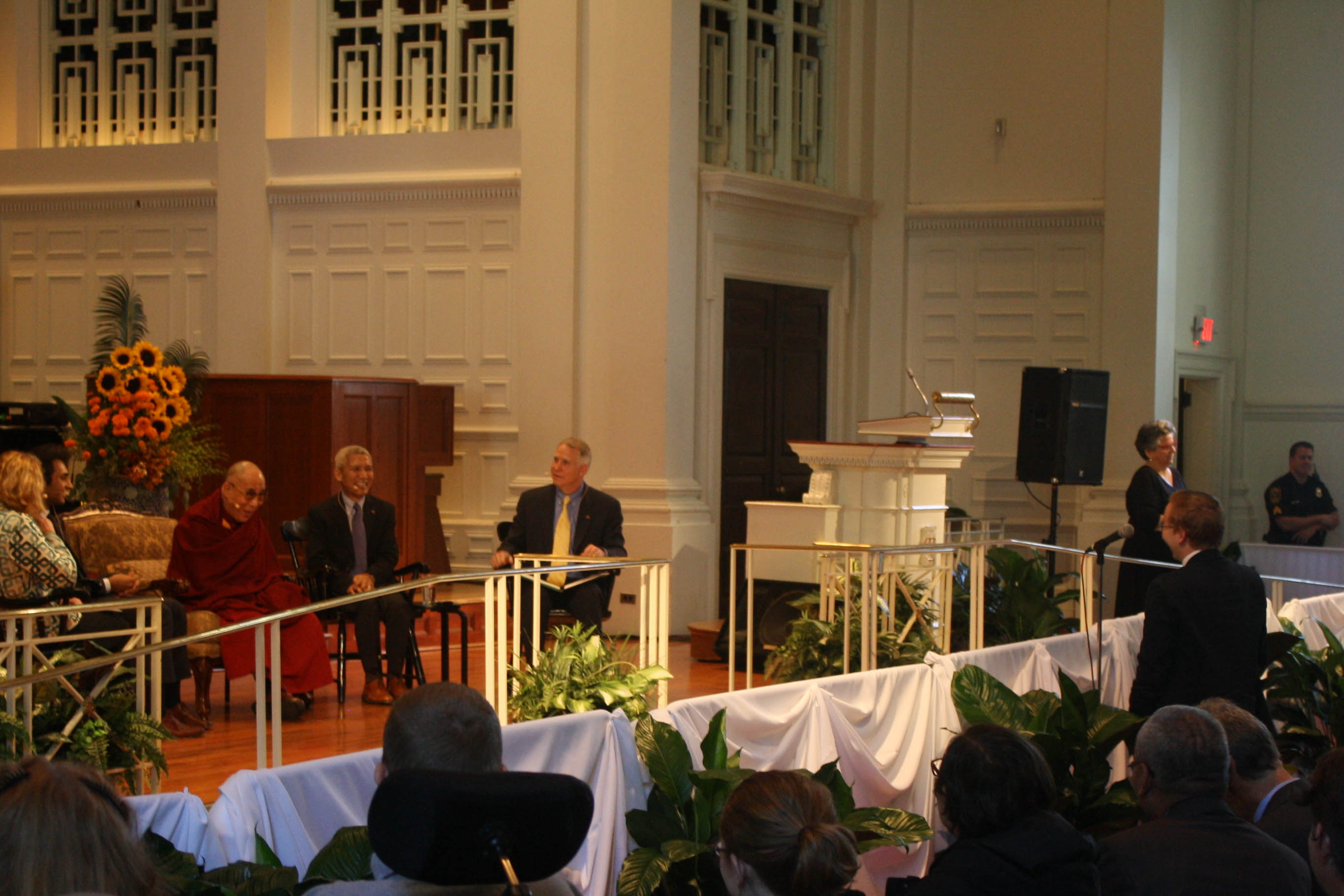 While at times he humbly and humorously said he could not offer the best advice on certain subjects, like the ethical distribution of wealth, such questions as how a person can live a useful life resulted in noteworthy answers. In a nutshell, His Holiness says people should live happily, both physically and mentally. One way to achieve this, he says, is to help others.

He explains that if a person sees another in trouble and ignores it makes them “feel uncomfortable”. By simply aiding the person, not only is that person happy that their needs are met, but the Good Samaritan feels important and happy as well.

In terms of religion, The Dalai Lama feels there may never be one religion, but everyone can be educated. Wagner stokes the discussion by suggesting that a person would not say “I love you, so I want you to be like me”. Their special guest responds by explaining that one does not find faith by being pushed into it, but rather by learning what belief is.

Though he practices Buddhism, The Dalai Lama appreciates all religions, but believes that education is what will bring everyone together: A lesson that can resonate with all students that attended, from Tibetan monks, to Christians, to non-believers. Religious preferences cannot diminish the experience of sitting in on a lesson from a piece of history.

The young and the wise engaging in timeless conversation will energize the minds of all that attended the lecture Wednesday morning for a lifetime. The Dalai Lama brought with him a safe, comfortable atmosphere. While he offered enchanting life lessons, he also breathed humility in admitting to not always having the answers or words of wisdom requested of him.

The opportunity in a nutshell, taught students the importance of education, morality and of knowing one’s strengths and weakness. The Dalai Lama illustrates that to teach is one of the most useful gifts; not with force, but with love and joy.

Emory University has been connected to The Dalai Lama for many years. He was named Presidential Distinguished Professor at Emory in 2007, the first university appointment accepted by the 1989 Nobel Laureate.

His appointment was an outgrowth of the Emory-Tibet Partnership, which was founded in 1998 to bring together the best of Western and Tibetan Buddhist intellectual traditions. As Presidential Distinguished Professor, the Dalai Lama continues to provide teaching sessions with students and faculty during Emory's study-abroad program in Dharamsala, India.

He last visited the campus in 2010 for a series of events on science research and meditation, creativity and spirituality, interfaith dialogue, and a teaching on compassion.