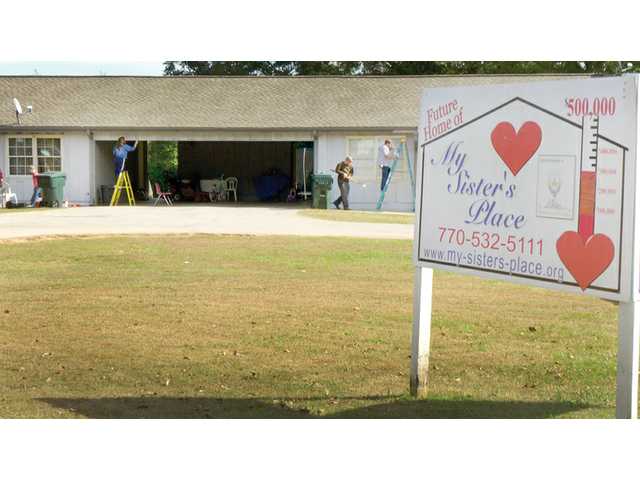 Lately, the “littlest things” are bringing tears to the eyes of the women at My Sister’s Place.

The Gainesville shelter for homeless women and children recently completed renovations and is moving into the building on Martin Luther King Boulevard.

“It’s these random things that get everyone excited,” My Sister’s Place Managing Director Brandee Thomas said. “From the countertops to the shiny bathtubs. People have cried over everything.”

While several groups have supplied furniture and other necessities for the new shelter, one group spent the weekend providing manual labor.

About 10 members of The Highlands United Methodist Church in Gainesville participated in the church’s first Change the World Weekend by helping the shelter move into their new place. Several members also helped to paint the exterior, resulting in a few watery eyes from the shelter’s board and residents.

Jeff Coleman, pastor of The Highlands, said the idea behind the weekend of service is to “change the world one church, one community, one choice, one life at a time.”

Additional groups from the church assisted at other area nonprofits.

Coleman said he thinks it’s important for churches to do mission work in their own communities as well as abroad.

“I think sometimes when you live in the local community, you go through your day with your blinders on,” Coleman said. “You don’t really see where there are places of need. We get so busy, kids have soccer practice and dance recitals and school and all the stuff and things we’re involved in. We’re cocooned and sometimes we just don’t see there’s a lot of need right here in our local community.”

Coleman said he thinks Jesus would be out helping people not “sitting in the church and thinking ‘Wow, where did all the people go.’”

Coleman said the goal of the local mission project is to build a bridge between the church, the community and people in need.

Hope and a change has affected My Sister’s Place recently. For years, the shelter operated out of a three-bedroom house at 610 Davis St. in Gainesville, but the need quickly outgrew the space available. Previously, the shelter was only able to help seven women and children at a time. But with their new building, the shelter can help as many as 20.

The nonprofit’s plans for a new building were made possible when it received a check for $270,000 from The Medical Center Foundation’s 2012 golf tournament. Several other individuals and organizations also contributed.

Thomas said the new building could never have happened without the community’s support.

“It’s all because of the community and we’ve found the community to be very generous and we’re very appreciative of everything,” she said.

The shelter will hold a drop-in Housewarming from 3:30 to 5:30 p.m. Sunday and offer tours.