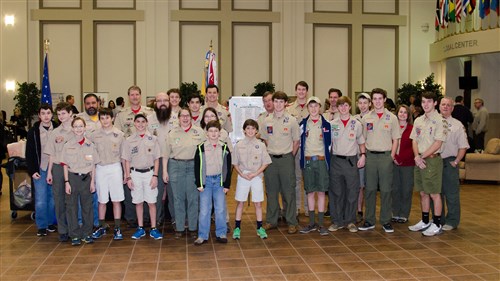 “On my honor I will do my best
To do my duty to God and my country
and to obey the Scout Law;
To help other people at all times;
To keep myself physically strong,
mentally awake, and morally straight.”

Mount Pisgah UMC of Johns Creek recently honored the success of Fran Gillis; a man who has been the Scoutmaster for Troop 629 since 1999. Gillis celebrated the one hundredth Eagle Scout under his mentorship, Sunday, February 1st, 2015.

The Massachusetts native performed his Scouting duties across the globe, in Korea, Honduras, China, and Germany as a part of the U.S. Army before working with Georgia Tech until 2013.

“Each individual scout’s journey is special and seeing their future bloom is a great reward,” says Gillis.

The Scoutmaster has served with six different scout troops during his fifty plus years with the Scouting program. During the last year alone, Troop 629, made up of 59 registered adult leaders and 86 youth members, produced eleven Eagle Scouts, an honor that is not rewarded easily.

According to the National Eagle Scout Association, “Not every boy who joins a Boy Scout troop earns the Eagle Scout rank; only about 5 percent of all Boy Scouts do so. This represents more than 2 million Boy Scouts who have earned the rank since 1912."

Gillis commends Mount Pisgah UMC, a church with an average attendance of about 2,000, for providing a safe and secure environment that he and the Scouts could meet in. He believes both Scouts and congregations benefit from these kinds of partnerships.

“A spiritual balance affords the participants to grow into well rounded young men,” Gillis explains, “while experiencing leadership opportunities, teamwork development, challenging activities and exposing them to various careers with the associated adults.”

These are among several reasons why a small church in Temple, Georgia greatly values the relationship it maintains with local Boy Scout Troop 25 for about fifteen years.

Pleasant Grove UMC has an average worship attendance of about five. The impact that the congregation has on the community, however, replicates the success of a hundred. The church sponsors a troop that usually produced at least one Eagle Scout a year.

“You see these young men work and you can’t help but want to help them,” says Rev. Carl Ratliff, who joins the troop’s meetings every few months or so to show his support and gratitude.

Ratliff and his congregation have great pride for those who work towards the Eagle Scout level. Several have aided the church through their qualifying service projects. These projects include making a pathway from the church’s flag pole to the building, constructing an awning to projects congregants from the rain, and more.

On Sunday, February 8th, the troop will join the church for worship in honor of Scout Sunday. Most of the service will be orchestrated by Troop 25, during which patches will be distributed.

“I’d like to see a Scout Troop of some kind in every church,” says Ratliff.

** Update:  Mount Pisgah donated  a total of 2, 017 items  for North Fulton Community Charities. If you know a scout  from Troop 629, shake their hand and thank them for facilitating this wonderful ministry contribution to our community.