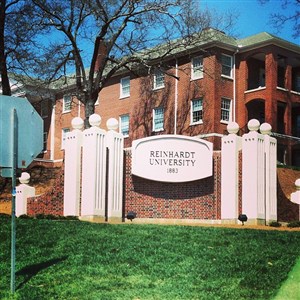 From Reinhardt University's Office of Marketing and Communications 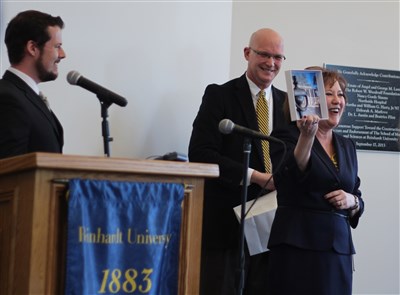 On Thursday, Feb. 12, 2015, the Board of Trustees of Reinhardt University in Waleska, Ga., announced the selection of Dr. Kina S. Mallard as the institution's 20th president during a press conference in the Science Center atrium. She was chosen by a vote of the full board on Feb. 10, and she will assume the office on July 1, 2015. Her selection completed a thorough seven-month search.

“Welcome Home” was the thread that ran through the event.  As Student Government President Alexander Bryant presented Mallard and her husband, Steve Dietz, with an engraved door knocker reading “Mallard & Dietz, since 2015, Welcome,”, he said: “I’ve always believed that if Reinhardt was a house, it would be old Southern farm house, with a big wrap around porch with a couple of rocking chairs.  Warm, comfortable, inviting, safe...  We, as the inhabitants of that old Southern farm house, would like invite you to come sit for a spell on the porch and stay a while. That house, our house, is also your house.  On behalf of the entire Reinhardt family, students, faculty, staff, trustees, and alumni, Dr. Mallard, welcome home.”

The press conference began with a prayer by the Rev. Dr. C. R. Hill, chair of the University’s Ministerial Association.  Search Committee and Reinhardt Board of Trustees Chair William G. Hasty, Jr. ’67 expressed gratitude for the standing-room only crowd.  He also mentioned the hard work and leadership provided by Trustees Cecil Pruett and Marshall Day, President Emeritus Dr. Floyd Falany, Search Committee Assistant Kelly Morris, SGA President Alexander Bryant, Faculty Chair Dr. Jonathan Good, and community representative and alumna Marguerite Cline ‘58.  “I want to thank them all so much, along with every single one of the search committee members and the Board of Trustees, for their diligence and dedication.  Everyone did a fantastic job.”

In introducing Mallard, Hasty said, “We were looking for someone who could increase our endowment and enrollment, as well as encourage community outreach, not only here in Cherokee County but also in Atlanta….  That’s what we were looking for, and of course, we’ve found her.”

He also praised Mallard for her personality and powers of persuasion.  “She is so enthusiastic and sincere,” he said.  “She has such a remarkable personality, that she before you know it, she has you convinced… Everyone that met her had positive reactions.  I know Dr. Mallard and her husband, Steve, will be involved in Reinhardt and the community.”

During her address, Mallard expressed excitement and energy: “Now is the time for moving together toward excellence in teaching and learning, in student life, in athletics, in facilities and grounds.  Now is the time to strengthen our relationship with the Methodist Church and seek opportunities for students to engage their faith through learning and living communities.  Now is the time to build new friendships and develop new partnerships to help support Reinhardt's mission and secure Reinhardt's future.  Now is the time to open our imaginations envisioning new degrees, new majors, and new approaches to meet the needs of our traditional undergraduate students and emerging adult populations. Now is the time to be innovative, creating strategies and pathways to ensure that all students who enter Reinhardt complete their degrees and are prepared for careers, equipped to make a difference in their families, communities, and the world… Let’s go Eagles!” 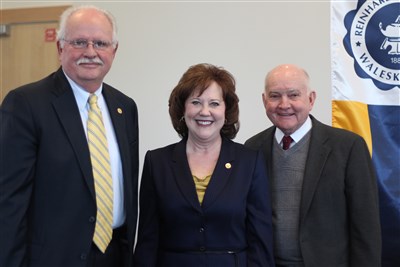 She said she was humbled and honored to be chosen as Reinhardt's 20th President. “From my first interview, I knew Reinhardt was a special place,” she said. “Over the past months as I have gotten to know its rich history, excellent faculty and staff, and superior students, I cannot imagine a better place to serve. I am grateful to the search committee for leading a professional, inclusive process, and for each member of the Reinhardt community who shared with me their commitment to working collaboratively shaping lives and building futures for all Reinhardt students.”

Isherwood will retire on June 30, 2015.  His 13-year tenure has been marked with new and renovated buildings, the institution’s transition to University status, and impressive growth in academic, artistic and athletic programming.

An experienced academic leader, Mallard comes to Reinhardt from Carson-Newman University, Jefferson City, Tenn., where she has served as executive vice president and provost since 2012. She was Carson-Newman’s provost and vice president for academic affairs from 2009 to 2012.  Prior to Carson-Newman, she has held academic leadership posts at Gordon College, Wenham, Mass., and Union University, Jackson, Tenn.  Her teaching career began in 1982 as a graduate teaching associate at the University of Tennessee, Knoxville, Tenn.  She also taught fine arts at North Greenville College, Tigerville, S.C., in the mid-1980s.

Mallard has a Doctorate in Communication and a Master of Arts in Organizational Communication from the University of Tennessee, Knoxville, Tenn., and a Bachelor of Science in Speech and Theatre from Middle Tennessee State University, Murfreesboro, Tenn.  Many of her published works address academic leadership, management, communication, and private and Christian higher education.  Her scholarly activities include several book chapters, including “Joyful Leading: Finding Joy in Faculty,” in Soul Care; “Finding and Sustaining Joy in Your New Role,” in Soul of a Christian University (co-written with Mark Sargent); “The Soul of Scholarship,” in Scholarship in the Postmodern Era: New Venues, New Values, New Visions; and “Christian Worldview and the Media,” in Shaping a Christian Worldview: The Foundation of Christian Higher Education.

A dynamic speaker, she has given presentations on faculty development, assessment, leadership, advising or instruction.  In addition to being the keynote speaker at the Women in Higher Education in Tennessee Conference in 2012, she has also presented at conferences for the Council for Christian Colleges and Universities, the Council of Independent Colleges, the National Conference of Academic Deans, the International Christian Community for Teacher Education, the Teaching Professor, and the International Society for Exploration of Teaching and Learning.

She has served in leadership roles in several professional organizations, including the Board of Directors of the International Association of Baptist Colleges and Schools; the Chief Academic Officer Commission of the Council for Christian Colleges and Universities, the Dean’s Executive Council for the Appalachian Colleges Association, and as a Senior Fellow for Faculty Development for the Council for Christian Colleges and Universities. Also recognized for her teaching abilities, she was named the Communication Educator of the Year by the Tennessee Communication Association in 1999, received two Innovative Teaching Awards from Union University, and was named Faculty of the Year at Union in 1995.

Mallard also enjoys volunteering in her community.  She chaired the CEO/President Search Committee and has served as Board of Directors vice-chair for the Jefferson County Chamber of Commerce.  She is also a board member for TN Achieves and the Mossy Creek Alliance (Downtown Revitalization Initiative). Her former activities include Jackson Exchange Club; Leadership Jackson Chamber Program Alumni Board chair; Leadership Jackson Chamber program member, vice-chair and chair; Mayor’s Advisory Board on Diversity member; Leadership University Chamber Program Board of Directors member; and the HCA Regional Hospital Women’s Advisory Board.

Mallard is married to Steve Dietz, and together, they have five children: Kaylen Mallard of Indianapolis, Ind.; Brad Dietz of Knoxville, Tenn.; Kristin Dietz Nelson of Elizabethton, Tenn.; Amelia Mallard Faulkner of Chicago, Ill., and Rebecca Dietz, a student at the University of Alabama. Dietz is the director of business development for Food Donation Connection. FDC coordinates and manages food donation programs internationally, providing surplus foods from restaurants, airports, grocery stores, motorways and many other venues to soup kitchens, food banks and other agencies that feed those in need.

Other News From Reinhardt