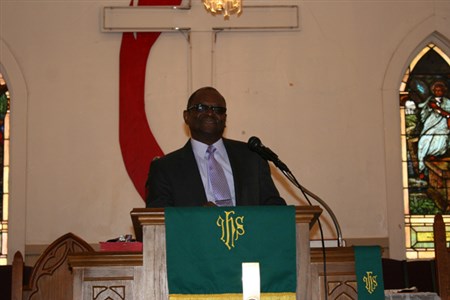 Rev. Robert Manley is a second career pastor who served the North Georgia Conference for nearly 18 years. He came out of retirement in September 2011 to pastor the Church whose rich history dates back to 1886.

“During reconstruction, it was founded by the African American community as a Sunday school on Clark College’s campus, which was located here at this time. Before the merger with The United Methodist Church, it was called the South Atlanta Episcopal Church,” Robert said. “I understand these were some faithful witnesses who didn’t have much as they were just coming out of slavery, but they committed themselves and stepped out on faith and built the Church in this community.”

Today, the Church averages about 65 people in worship each Sunday. There are a faithful few in the congregation, but what impresses Robert the most is their willingness to pay 100 percent of their apportionments every year.

“Our Church has seen tremendous change. During the early days of segregation, this was a thriving area for blacks in Atlanta. After some of the racial obstacles were removed, blacks in the community began to move to other areas of Atlanta and became affiliated with other churches,” Robert explains. “Then, new people moved in. The community has transitioned so much so that we find ourselves in almost a deteriorating condition because the folks that used to be here are now gone.”

In 2007, the Church’s leadership team took out an $85,000 high interest loan to purchase a neighboring property. They agreed to pay it off in seven years, and when the note came due, they didn’t have the money. That’s when Robert turned to the Foundation for help.

“Refinancing the loan with the Foundation lowered our interest rate and monthly payments. We now have other finances to revitalize the ministries of the Church and to focus on our primary mission of making disciples of Jesus Christ for the transformation of the world,” Robert said. “We are fortunate to have the Foundation to assist in providing the expertise, advice and guidance small churches can really use in order to secure financing, and to help them overcome some of the challenges they face.”

This article was originally published in the Winter 2015 edition of Faith & Money, a publication of the Georgia United Methodist Foundation.