An average church attendee hears the story of Jesus’ birth during the Christmas season, but most would expect to hear of shepherds, mangers, and a guiding star. This year during Tucker First United Methodist Church’s traditional production of “Christmas at Tucker”, Tom Moore followed the call from God to tell the story of Christmas in a modern way.

Before December of 2013, the script for the annual performance took place during the time period of Jesus. Each year the story is told through a different perspective like Isaiah, shepherds, and Mary and Elizabeth.

Months before the Christmas season,  Moore, Tucker First UMC’s Director of Music and Art, felt a nudge to completely change perspectives. The goal was to create a story that the congregation could relate to. He began to envision a tale of an average American family from this day and age that takes in a young girl who is… different.

Moore was unsure at first of how she would be different. Would she be an exchange student? Would she be poor or from a different school? While unsure of the back story, he knew the production would focus on her journey as the family teaches her the story of Jesus.

Tucker First UMC does not conduct the average Christmas play.

“We have numerous talented persons who work very hard to offer this gift to our church and the community, said senior pastor, the Rev.  Jimmy Moor. “Their dedication and God's grace result in a wonderful offering.”

Not only does it require actors and actresses, as well as an orchestra, choir, and dance team, but an enthusiastic writing team is also built to create each original yearly skit.

When Moore brought his vision to the table, a writer informed him of an article posted in the Atlanta Journal Constitution about two sisters who graduated at the top of their classes.

While the girls always excelled in school, they never revealed the details of their home life until graduation day. The sisters, who attended different schools, each gave a speech and shared with their class that they were homeless and in transitional housing with their mother, Reenita Shepherd.

“I began to think,” said Moore, “of how many people in our community could be homeless without us ever knowing it.”

With these thoughts burning, Chelsea and Chelesa Shepherd became the models for Christmas at Tucker’s lead role, Allison.
As the script came together the crew began to realize that the story of the birth of Jesus was much like that of a homeless family.

“These girls have parallels to Mary,” Moore explains, “They are scared and have nowhere to go.”

As the writing progress continued, the life of the Shepherds and of fictional Allison appeared to almost mirror that of Jesus and his family. 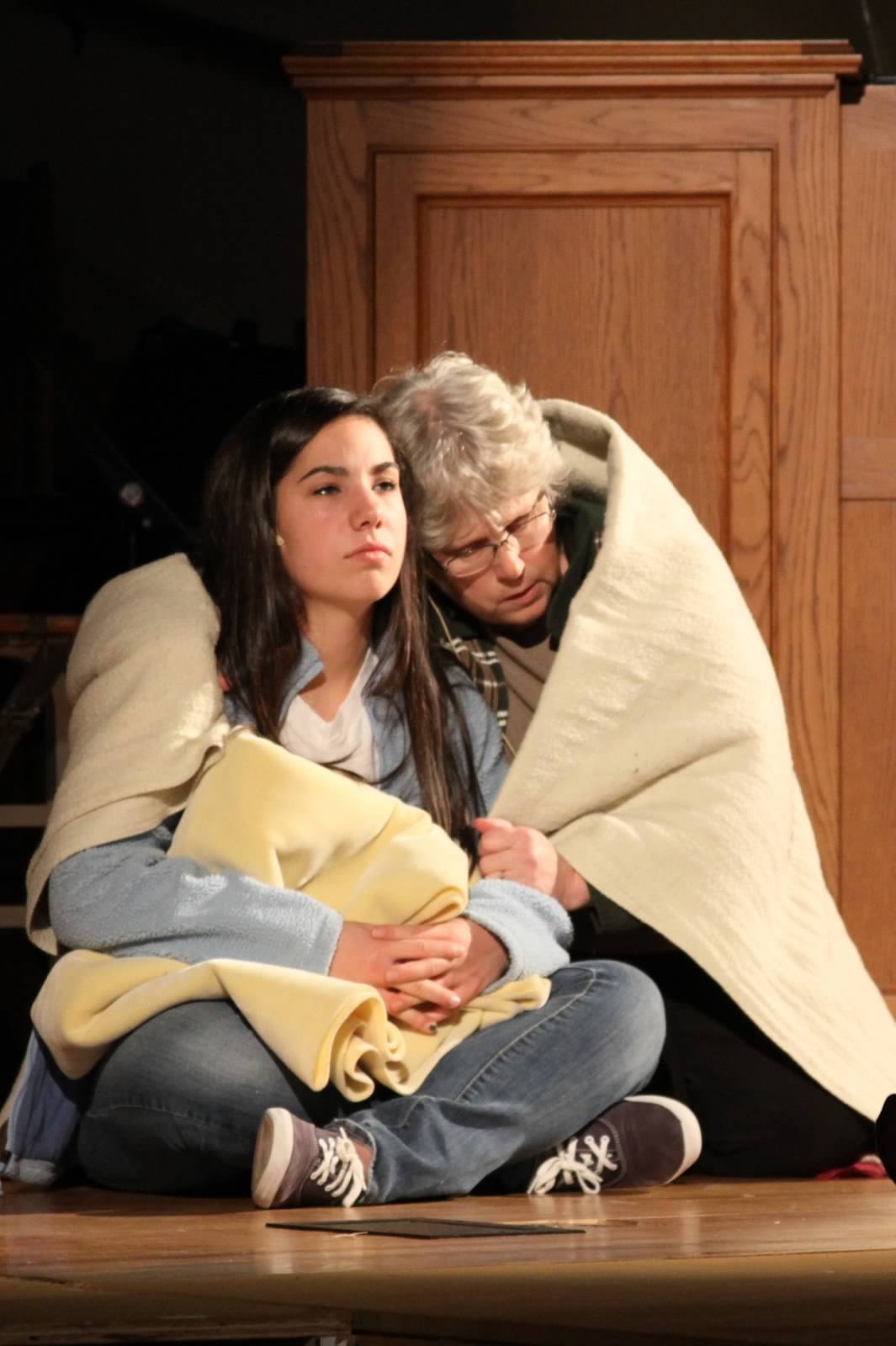 Another unexpected parallel was found while searching for an actress to play Allison’s mother. A vague ad was placed around the church simply requesting a woman to play a non-speaking role in the play. When a member answered the call, it was not until she received the script that she found out she would play a homeless mother, a story much like her own.

Earlier in life, she found herself homeless with two children after a divorce. Though that time has long passed, she hardly ever shared her struggle with others. She bravely accepted the role that would bring back so many memories. Though she had no speaking part, she found herself teary while having to embrace her on-stage daughter in a shelter scene.

The production, titled “My Heart, Your Home” after a well-known praise song, teaches that everyone can give something to Jesus, regardless of economic status or struggle. In the story, Allison is asked what she would give to Jesus if she were a shepherd.

“You have your heart that you can give to Him,” she is told after answering that she has nothing to give.

The entire cast and crew felt so connected with the Shepherd family that once Christmas time approached they wanted to invite the family to the production. Moore got in touch with the writer of the AJC article, Nancy Badertscher, to ask for contact information for the family and told her about Tucker First’s performance.

When the mother spoke with Moore she told him that they “never turn down an invite from a church”. The family sees church as the foundation for helping them in all of their successes. Reenita, along with Chelsea and Chelesa attended both showings, during which the congregation was not informed of their association with the play until after they had experienced the show.

The AJC was again inspired and writer Tammy Joyner posted an article on how Tucker First based their Christmas program on one of Georgia’s homeless families. Both AJC writers attended the shows and were recognized after each production.

“My Heart, Your Home” ended with the passing of a bucket to donate money to the church’s Good Samaritan Fund. A card was also placed in each program so that attendees could sign up as volunteers to aid the homeless community.

Since the production, Reenita Shepherd has been requested to speak to Tucker High School’s tutoring program, along with Chelsea and Chelesa. Tucker First UMC hopes to have the Shepherds back to speak to their youth program.

The Tucker First family is proud of what they accomplished and look forward to highlighting another modern day struggle in next year’s Christmas at Tucker.

“Make sure God gets the glory when you’re patted on the back”, Tom Moore says to all who were involved.

More on Reenita Shepherd and Her Family

Reenita Shepherd is a former homeless woman in transition. She is the proud mother of four children. Her daughters Chelesa Fearce and Chelsea Shelton graduated at the top of their class. Chelesa was a dually enrolled student at Charles Drew High School and Clayton State University and graduated as Class Valedictorian with a 4.52 GPA. In fall 2013, she entered Spelman College as a junior on a full scholarship and majors in biology with a minor in philosophy and mathematics. Her daughter Chelsea graduated from Carver School of Technology as Class Salutatorian with a 3.8GPA. In fall 2013, she entered the University of West Georgia on a full scholarship. Her son Nicholas is five years old in kindergarten and four year old, daughter Cayleigh is in Pre K in Clayton County.

She grew up as a foster child. Her teachers and social workers were her role models. She relocated to Atlanta, Georgia in 1996 and obtained a job teaching at a Head Start program that she enrolled her children in. She made the decision to work with children because she wanted to give love. She knew she could guide, help, teach, and nurture every child in her care. Over the years she took in troubled neighborhood children because they needed her attention, guidance, and love.

In 2005, tragedy struck and she became ill. She could not work and was not receiving her court ordered child support. She ended up homeless living in various emergency and transitional shelters and hotels for several years. She was laid off, the economy was bad, and it was a struggle for her to survive. She relied on her faith and reached out to her children’s teachers, social workers, school counselors, principals, employees at shelter, and homeless liaisons to help her. All of these people actively engaged in and impacted her life. Their help and caring attitude helped her to help her children to be successful in spite of their homelessness.

She was first interviewed by the Atlanta Journal Constitution and appeared on Channel 2 news. She has been featured in We Are Clayton magazine. She has been the recipient of the Tom Joyner Morning Show “Thursday’s Mother”. She has been the motivational speaker for Michael Thurmond and Dekalb County employees, the Hank Stewart Foundation and many churches. She has been the recipient of an award from Pointe South Elementary School for her volunteer efforts and commitment to the school.  Most recently she was presented an award from the State of Georgia Department of Education for her leadership, and extraordinary strives she made in developing and motivating her children to excel academically.
News